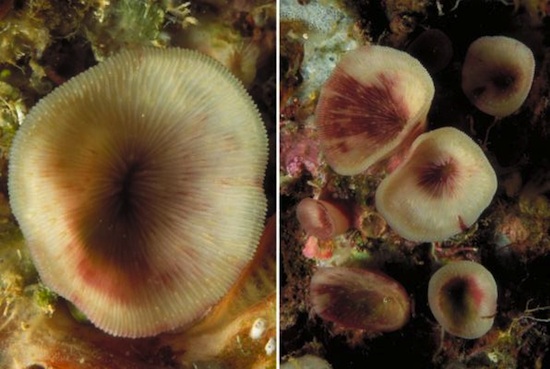 Marine biologists have discovered a new type of coral that lives on the ceilings of underwater caves where no coral has been found before. This bone white coral isn’t just unique in where it lives, it also lacks the symbiotic algae that most corals depend on to survive. That the new species, Leptoseris troglodyta, doesn’t carry this algae, known as zooxanthellae, may be a peculiar trick of evolution that makes it particularly suited towards life in the twilight caves it calls home.

Zooxanthellae are a class of symbiotic algae that help reef corals grow faster. Since living space is severely limited in the cave ceilings and dimly lit overhangs that Leptoseris troglodyta resides in, jettisoning the traditional relationship with the algae may be an evolutionary adaptation that helps the coral grow and spread more slowly, conserving valuable space and preventing population booms that could end in disaster for the coral colonies. Since most corals become bleached when they lose their algal colonies, the lack of a relationship with zooxanthallae could explain the cave corals distinctive pallor as well.

While this new coral is a particularly weird one, it’s not surprising to find it where researchers did, in the so-called Coral Triangle, a region of the Indian and Pacific Oceans renowned and studied for its biodiversity and abundance of corals and sea life.

The coral, which seems to thrive without access to sunlight, is generally found around 35 meters below sea level, approaching the 40 meter mark where most reef corals stop appearing altogether. The fact that it thrives in the perpetual darkness of underwater caves, though, leads marine biologists to suspect it could also be found in caves farther below the surface.

You can read the study in its entirety on ZooKeys right here, because ZooKeys is open-access, and open-access journals are the freaking best.

(via Eurekalert, image courtesy of ZooKeys)