In Case You Were Worried: Nolan’s Catwoman Will Have Ears 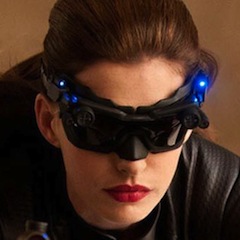 “Catwoman’s goggles, when pulled back like a headband, will take the form of cat’s ears much like the image of Catwoman we all know and loved!”

There’s been a lot of fan-people worry over the tiny, none-too thorough looks we’ve gotten at Anne Hathaway‘s Catwoman costume for Christopher Nolan‘s final Bat-film The Dark Knight Rises, mostly stemming, as far as we can tell, from how much it looks like a catsuit and not a Cat-suit. Well, this morning a number of fan sites are spreading the above rumor around.

Sounds pretty likely to us, frankly.

Nolan’s been good at toning down the more outlandish but comforting aspects (to comics readers) of the Batman mythos to his trademark gritty paste style. But he’s never had a character who lost connection with their namesake. It was still obvious why Scarecrow was called that, and to have a Catwoman without some stylized nod to cats for other characters to pick up on so that the name Catwoman actually makes sense in universe seems unlikely.