Catwoman With Every Fictional Cat Ever. Almost. 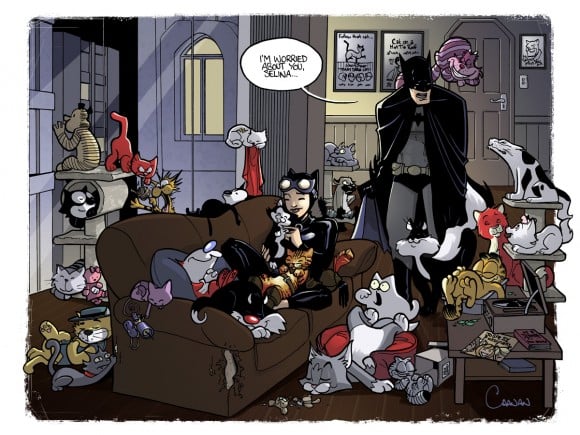 If this is the definition of Crazy Cat Lady, count me in. In case you need a primer, DeviantArtist caanantheartboy hooks you up:

Behind the couch: Krazy Kat, Azrael (Smurfs), Bill the Cat, Felix, MAD Cat (with a Hello Kitty doll), Top Cat and Snowball II. On (and above) the couch: Streaky (who is orange, yes. My bad!) Mooch (Mutts), Stimpy, Mr Kat (Kid vs Kat), Sylvester, Puss in Boots, Figaro. The rest: Tom, Simon’s Cat, Nermal, Garfield, Penelope, O’Malley, Marie (I wasn’t gonna do ALL the Aristocats!), Horse (Footrot Flats), the Cheshire Cat, and Bucky and Scratchy behind Batman. The posters are That Darn Cat and Cat on a Hot Tin Roof. (I also could have done The Cat from Outer Space, Le Chat Noir, and many others. Space restrictions!) The framed ‘cat man’ is Blacksad. The record is of course Josie and the Pussycats and the book, which has become illegible from the scanning, is Jennie, by Paul Gallico. (I believe it may be called ‘The Abandoned’ in the US?) It’s about a girl who turns in to a cat. My dad read it to me and my brother when we were kids.