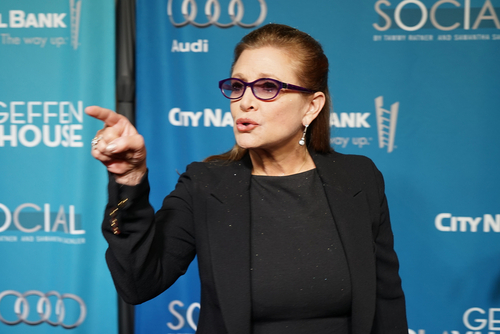 Carrie Fisher has been a busy lady of late! Earlier this week, she received the Outstanding Lifetime Achievement Award in Cultural Humanism from the Humanist Hub, and yesterday she appeared in a live Q&A at New York’s Tribeca Film Festival.

The Q&A was moderated by Vulture’s Alex Jung, and also featured writer/actress Sharon Horgan, who wrote and stars in Catastrophe, a new Amazon Original Series about a London-based teacher who becomes pregnant after a one-night-stand with an American.

As reported by Forbes, at one point in the panel, Jung began to say to the women, “I think there’s a fundamental lack of opportunity…,” and Fisher finished his sentence: “For women […] of a certain age. There are not a lot of choices for women past the age of 27.” Fisher told Jung that, even as a child, she was acutely aware of Hollywood’s ageism: “I did not want to be an actress. I watched it growing up and there was no glamour in it for me. I know what happens in the end — or in the middle.”

Horgan, who plays a woman in her 40s in Catastrophe, agreed with Fisher that 27 is the official expiration date for women in entertainment, saying “That’s the magic number.” But there are upsides to having no delusions about how the entertainment industry treats women. According to Horgan, “the great thing about being my age is that I know it’s all bullshit.”

The pair also talked about writing their own roles. Uproxx describes one particularly interesting anecdote from Fisher:

The most interesting Star Wars tidbit came when Fisher said that one single line of Star Wars dialogue was responsible for her wanting to become a writer. She hated this line so much, it inspired her to write her own stories. What was this line?

“I have placed information vital to the survival of the Rebellion into the memory systems of this R2 unit.”

Fisher also joked about having certain limitations as a writer: “I wouldn’t really know how to write for a man. I don’t know them that well.”