We Already Miss Carrie Fisher So Much | The Mary Sue

In Memoriam: We Already Miss Carrie Fisher So Much 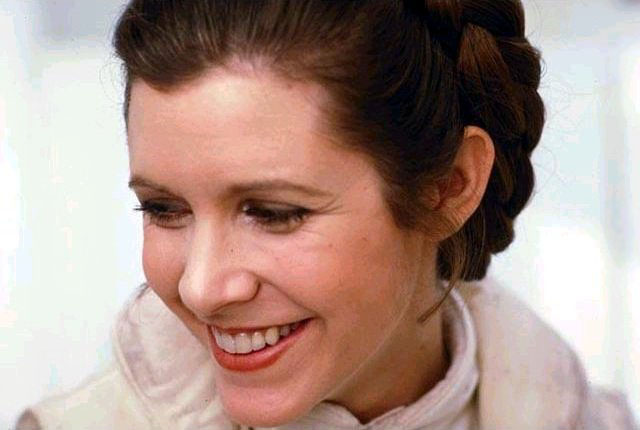 Last week, when Carrie Fisher suffered a heart attack, we all spent the subsequent days hoping beyond hope that she would pull through. We have all just learned that she passed away this morning.

Ever since I heard about her heart attack last week, I hoped that we would not end up having to publish an obituary for Carrie Fisher here. But of course I couldn’t help but reflect back on how much she has meant to me, and how many times we have covered her here, and what I might say if the worst should happen. Luckily, I have had many occasions to highlight her excellence in the arts and in advocacy while she was alive, so there are a lot of links to draw from. It pains me that I even have to write that sentence in the past tense.

I’ve written a handful of celebrity obituaries since I’ve been here, and I imagine this won’t be the last, but it’s probably the only one that I’ve had to write while crying. This is a strange experience for me, because I ordinarily don’t have the ability to feel emotional connection to any celebrity figure, because it’s, well, a complete stranger. Obviously Carrie Fisher is also a complete stranger to me. But I think one reason why her work and legacy strike me as so important is that so much of her public persona revolved around a direct acknowledgement of her own discomfort with the public eye. She would tell jokes about it, acknowledging how strange it was that people conflated her with her most famous role, and even acknowledge directly how weird it is to be a celebrity at all. Her work feels so relatable, and so charming, and her grace under that constant scrutiny will always resonate with me.

In every interview she did, and every memoir that she penned, Carrie Fisher remained unflinchingly honest about her feelings and experiences. She spoke openly about her bipolar disorder, about her history of addiction, and her ongoing struggles with her own body image. These were not struggles that resulted in a happy, rose-colored, redemption narrative for her. These are not problems that can be tied up in a pretty package and put away on a shelf somewhere, forgotten. They are a part of her, and they are a part of what makes her great. Carrie Fisher continued to remain honest about these aspects of her life throughout all of her public appearances, using her platform to normalize her experiences and serve as a disability advocate, for herself and for others.

Carrie Fisher was also not shy about speaking up about the sexism she has experienced throughout her career. In a very recent interview on The Late Show, she talked about how she still wished Princess Leia had been able to get a lightsaber–ideally, a purple one. In that same interview, she also discussed her most recent memoir, The Princess Diarist, which includes details about her long-rumored affair with Harrison Ford during the filming of the first Star Wars. Of course, this one small detail ended up blowing up in the news, thanks to the priorities of tabloids. The news blitz about the decades-old affair ended up causing a lot of anxiety for Carrie Fisher, like all the other forms of intense scrutiny she has faced–although ultimately she did not regret being honest about her life, and for that we should celebrate her.

As a young girl, I looked up to Princess Leia. But as an adult woman, it’s Carrie Fisher whose work I’d prefer to highlight. This is one of those rare cases where the fantastical, amazing female character of sci-fi might actually be outshone by the real-life woman who plays her. Carrie Fisher may not have had to deal with a fascist regime and the destruction of her home planet (which, um, hopefully aren’t things that we will have to deal with in 2017). But she did have to overcome adversity throughout her career, both in terms of her personal struggles as well as the institutional adversity that women actors and writers end up facing, and she grew up to be an incredible icon for us all.

Although most remember her only as Princess Leia, we here at The Mary Sue frequently point to Carrie Fisher’s legacy as a writer and a script doctor. One of her many awkwardly-worded lines in A New Hope was what inspired a teenaged Fisher to become a writer herself, and she ended up being one of the best-known and most-lauded script doctors in Hollywood. Not to mention she’s written multiple fantastic, hilarious memoirs about her incredible life.

I also had the good fortune to see Carrie Fisher speak in person earlier this year; she gave a talk at Harvard University, and I did my best to recap her talk for you. Above all, during that event, I respected the fact that she seemed to have endless patience for discussing Star Wars, in spite of the fact that it’s far from the only contribution she’s made to the arts in her career. She’s always patient with fans, even while at the same time, she tells jokes about how strange it feels for her to have been the object of so many straight male adolescent fantasies. She toes the line between a deep love and respect for her fans, while also acknowledging when fans go too far into creepy territory. It’s incredibly difficult to walk that line, but somehow, she did it, every time, with grace and humor.

I think I’ll end this obituary by celebrating her sense of humor. Carrie Fisher is–was–is effortlessly funny, in person and in the written word. Here’s an excerpt from her memoir Wishful Drinking in which she describes the way she hopes her future obituary will end:

RIP Carrie Fisher, she died as she lived: drowned in moonlight, strangled by her own bra

(from her 2008 memoir, Wishful Drinking) pic.twitter.com/gphmobXxeg

So, let us do as she asked, then. Earlier today, Carrie Fisher drowned in moonlight, strangled by her own bra. She will be remembered and loved.