NASA Discovers a New Kind of Martian Snow; We Hope They Give Curiosity a Snow Day 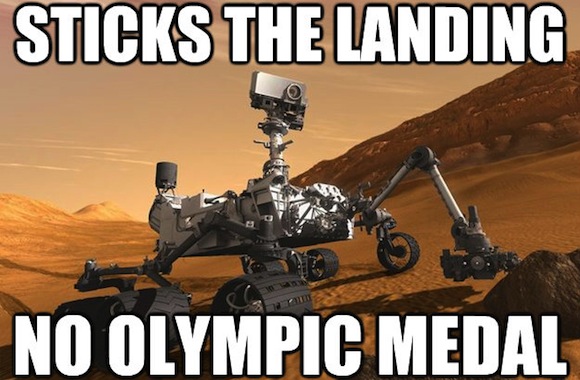 Recently scientists were combing through data and observations collected by the Mars Reconnaissance Orbiter, and noticed something they’d never seen before: snow.

Not regular snow, made of water molecules. That weather phenomenon was observed on Mars in 2008 by the Phoenix lander. This snow is, so far as scientists have observed, unique in the solar system: it’s made of carbon dioxide.

Carbon dioxide, is, of course, used most frequently in my experience for its properties of being a gas at room temperature on Halloween. The temperatures you need to get carbon dioxide snow run around -193 degrees Fahrenheit.

“These are the first definitive detections of carbon-dioxide snow clouds,” says Paul Hayne, of NASA’s Jet Propulsion Laboratory in Pasadena, “We firmly establish the clouds are composed of carbon dioxide — flakes of Martian air — and they are thick enough to result in snowfall accumulation at the surface.”

The occurrence of carbon dioxide snow is especially relevant because it may help explain how Mars manages to maintain its snowy southern ice cap year round. Scientists have never really been sure how the dry ice gets there, whether it freezes straight out of the air when in contact with the ground, or is deposited in some way. Precipitation may now be the answer.

How soon anyone will be able to roll up a Martian snowball is beyond our current projections. It’ll have to go in the dream bin with wooly mammoth clones.