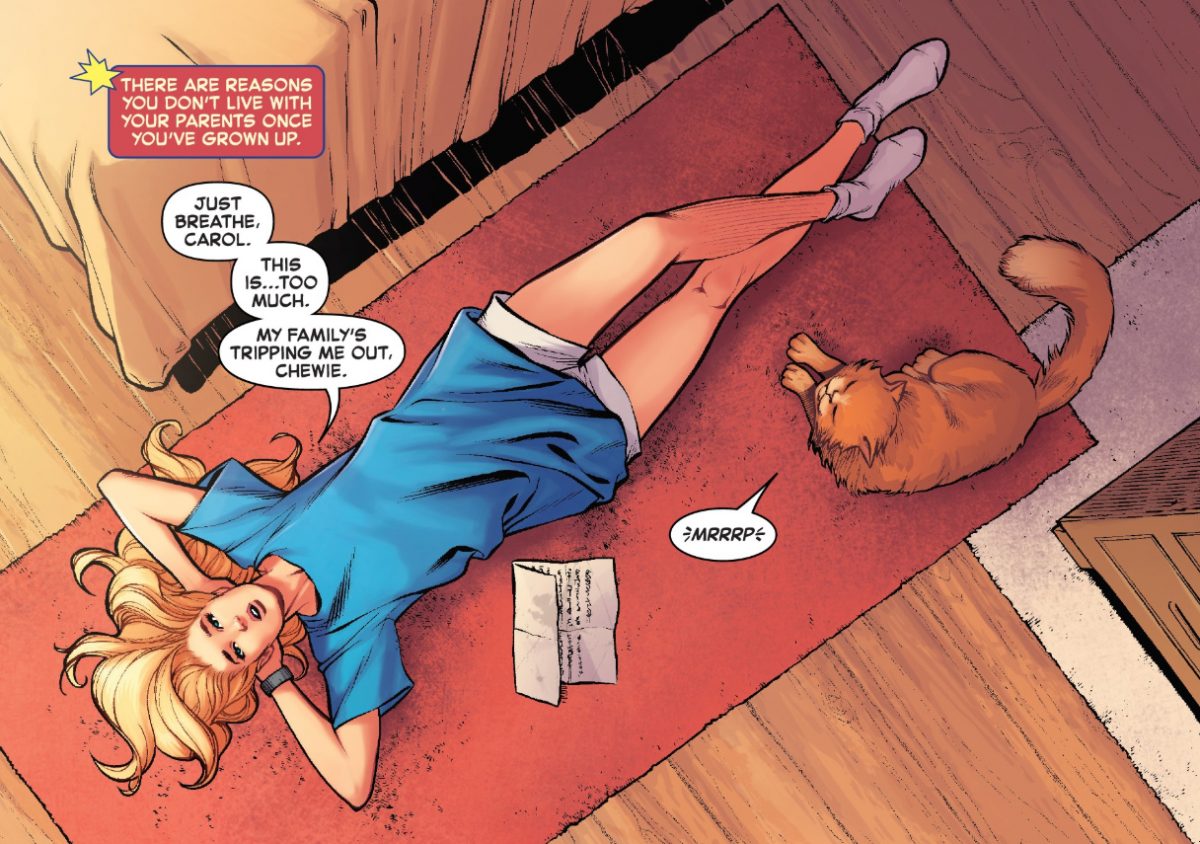 Since Avengers: Infinity War, we’re been understandably distraught, but thankfully, Carol Danvers (Brie Larson) avenged our broken hearts when her trailer launched last week. That trailer also came with a poster packing a furry Easter egg worthy of Marvel’s legacy, but let’s back up a bit to put it in context.

From punching Skrulls who were moonlighting as harmless grannies to revitalizing our ’90s nostalgia, the Captain Marvel trailer gave us a bit of hope, and a lot of tears, in our post-Infinity War despair. Seeing as Carol’s MCU debut deviates from her comic book story arcs, we’ve been on the hunt for any clues about our favorite planet-launching hero’s movie-adapted origin story.

While we’re well-versed in Captain Marvel’s painfully humanizing story of abuse and substance abuse in her affiliated comics, Marvel Entertainment will give the prospective Avenger a new origin story in her film run, which parallels her updated origin in the ongoing comic The Light of Captain Marvel. Honestly, we love a bit of ambiguity, but between the Russos’ cryptic Avengers 4 set photos and Carol’s new narrative, we’ve been doing a lot of sleuthing.

Adding this Captain Marvel cast & crew hoodie to the rotation!#thanksbrie&me#errrbodyearnedtheirstripesonthisone#higherfasterstronger

In addition to the Insta shot of the Fury/Danvers crest design, one of Carol’s longtime companions also has a cameo on the hoodie: Chewie, the cat who isn’t really an Earth cat. Although Jackson’s photo might seem like a simple call out to the comic cat, the official Captain Marvel poster also included a furry Easter egg in its design: 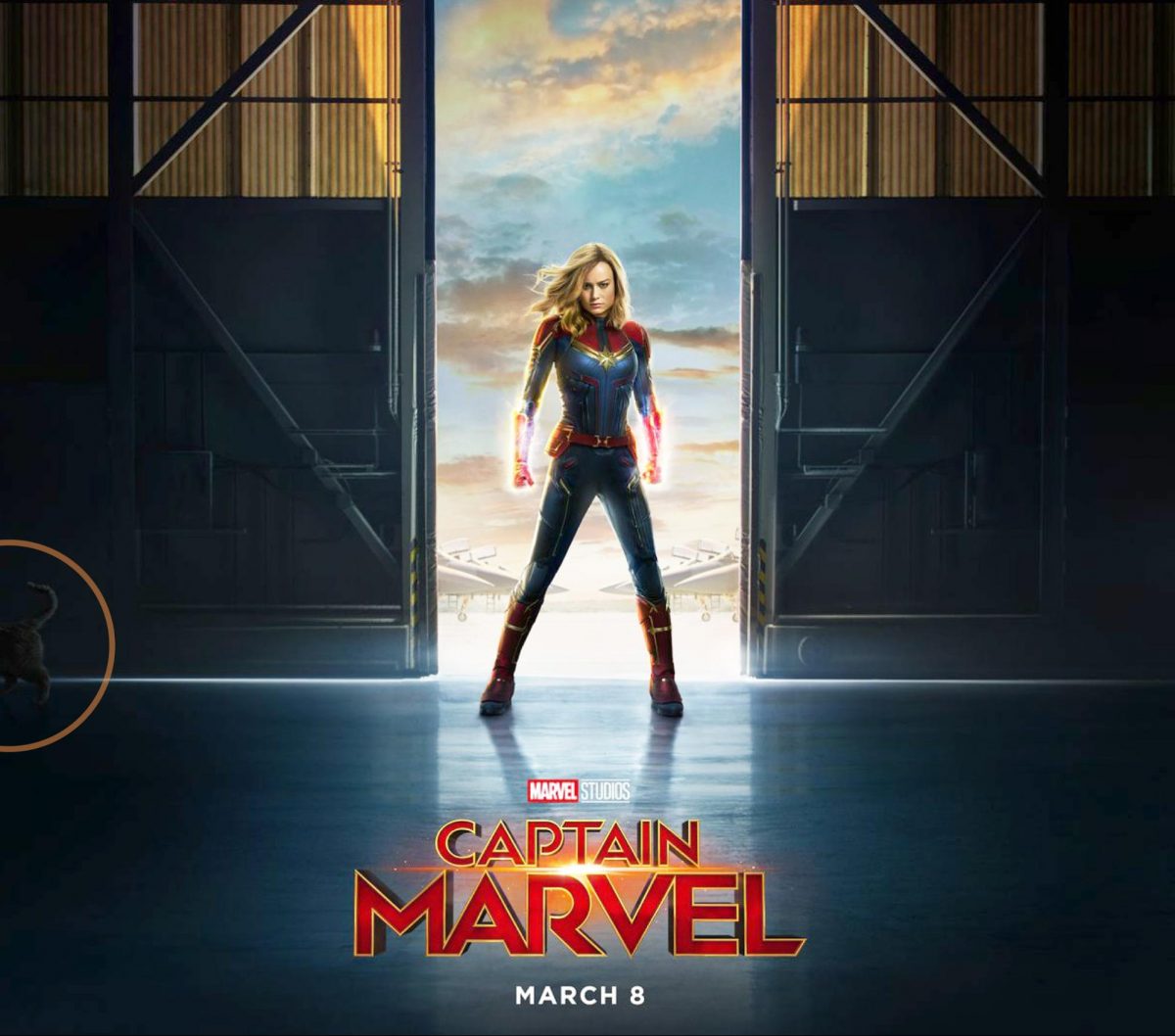 That’s right: That’s a Flerken tail in the official red, blue, and gold promo image. Though the movie version of Carol’s pet might be the same pseudo-cat from the comics, Chewie’s narrative isn’t immune to changes in the impending blockbuster. According to Comic Book, Captain Marvel’s pet alien cat could don a revamped name based on the movie’s ’90s setting. After Her Universe founder and owner Ashley Eckstein attended a Marvel Studios event in early August, she posted some photos of the official event swag.

Fun day @Marvel Can we talk about how excited I am for CAPTAIN MARVEL??? Can March be here already??? #captainmarvel pic.twitter.com/2B3j5jezyY

While the event payed homage to Captain Marvel by recreating her iconic star emblem in an edible fashion, some of the treat also included a precarious paw print, along with a pet tag embellished with the name “Goose.” So, Carol’s fluffy-but-deadly companion seems to be getting a new name. However, her cat’s unique abilities will probably stay the same.

In case you aren’t familiar with Carol’s comic adventures or you just need a refresher on everything Flerken-related, you might be wondering what makes this extraterrestrial furball so exceptional. Beyond being besties with Captain Marvel and being a walking contradiction—seeing as Chewie is a formidable feline hater, despite looking like an Earth cat—Flerkens have an array of abilities and powers, and we’ve ranked some of our favorites based on how useful they might be in Infinity War’s presently untitled sequel.

After all, we can’t help but root for the heroes, especially when they’re a lethal combination of adorable and perilous. 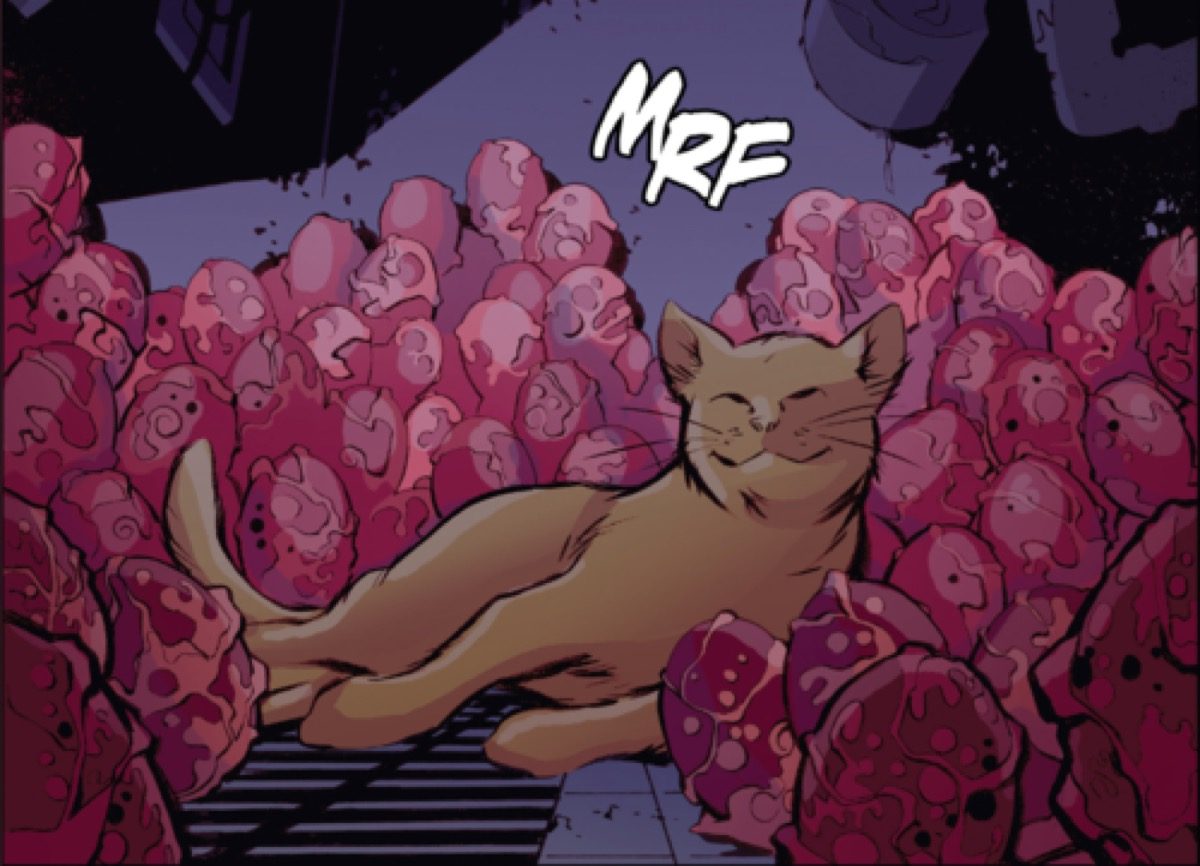 Although Rocket Raccoon tries to convince Carol that her cat isn’t actually a cat, she doesn’t believe him, and Chewie inevitably seizes the chance to lay her eggs aboard Carol’s ship. In hindsight, she should have been cautiously suspicious of Chewie’s real identity. Even Rocket told her that looks can be deceiving, seeing as he isn’t an Earth raccoon, though he may look like one.

Shortly after Carol let Chewie out of her kennel to roam around the ship, she had enough time to lay all 117 of her eggs. As issue seven was wrapping and space pirates were attacking the ship to steal the galaxy’s most valuable cat, Chewie kittens had enough time to start hatching.

Quick propagation and an invasive species might not seem like the best match for the rest of us, but Chewie’s the last of her kind, and swift reproduction can be strong asset when you’re single-handedly trying to repopulate your species. She and her 117 Flerken kittens can quickly gain the advantage of sheer numbers. Although Carol had more tentacles to feed after the Flerkens hatched in her titular series, their reproductive process also meant more deadly species to help Carol save the universe.

The MCU is already teeming with dangerous antagonists, but given Chewie’s loyalty to Carol, we can assume her MCU offspring will have the same devotion and help their Earthling friend defeat bad guys. 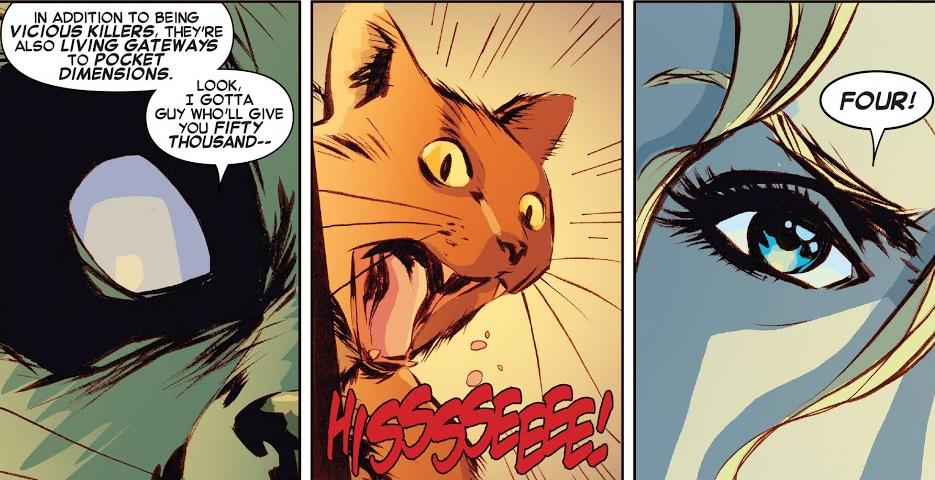 After trying to kill Chewie in the Captain Marvel comics, Rocket attempts to buy her from Captain Marvel, because apparently female Flerkens are pretty valuable on the intergalactic black market. As he tries to barter with Carol, he reveals that the endangered alien species is innately dangerous itself.

Flerkens can conjure up a plethora of different dimensions and timelines, and they don’t need superpowers to do it. Their abilities to access and manipulate different realities resides, biologically, inside their own mouths. In their furry cheeks, Flerkens have access to a plethora of pocket dimensions, which open up an assortment of different abilities, including the ability to store large amounts of … whatever they like, really. A large quantity of eggs for more Flerkens, perhaps?

Though Doctor Strange might currently be debris on Titan, he isn’t the only superpowered ally who can teleport. Granted, Flerkens don’t need to master the Boom Boom Whoosh to move between physical space, between dimensions, or reality itself.

Unlike standard teleportation that transmits a person from one physical location to another, Flerkens can also use the pocket dimensions within them to transport to other dimensions or realities.

Tentacles with a bite 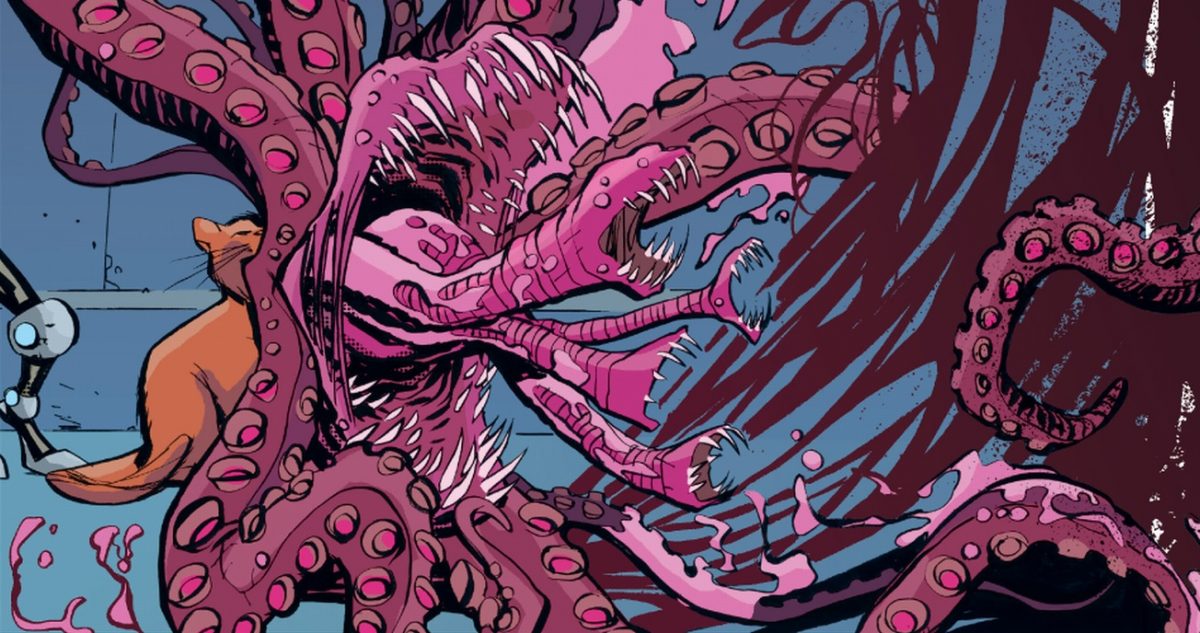 Right in their mouths, Flerkens harness the energy of countless cephalopod tentacles, if an octopus somehow crossbred with the bloodthirsty Venus flytrap from Little Shop of Horrors. Shortly after Chewie’s kittens started to hatch at the end of Captain Marvel (2014) #7 and the beginning of #8, she used her motherly instincts, with the help of her tendrils, to gulp down the marauders, likely dragging them into one of the pocket dimensions she’s hoarding in her mouth.

These fearsome mouthed tentacles, equipped with fanged nested mouthparts on each one, fit comfortably in Flerken mouths thanks to those very same pocket dimensions.

In the MCU, Goose’s various powers could render her a worthy opponent against Thanos, or at least a helpful aid in his demise. Ultimately, this whole list of Flerken powers could be pointless, because there’s still plenty of time for Carol Danvers or Goose, or even both, to turn to dust in the wake of Thanos’ snap, although that’d certainly make Infinity War’s post-credits scene a bit anticlimactic.

We know that Goose’s comic-self is a proficient tentacle-slinging, purring monstrosity. Flerkens are going to a place where no pseudo-cat has gone before—the theater—so there could easily be changes to the character’s physiology or abilities, just as there appear to have been to its name. Captain Marvel already has a knack for altering its relevant characters in refreshing ways, so the production could reshape the way Flerkens can manipulate time, space, and reality—or remove it altogether, if the change from Chewie to Goose also means going from Flerken to regular cat.

Though we can’t predict how exactly Captain Marvel will reimagine its characters, we can assume Goose will still be Carol’s same protective pet and friend—even if her comic counterpart did leave her kittens behind at a protective facility to join Carol in her intergalactic endeavors.