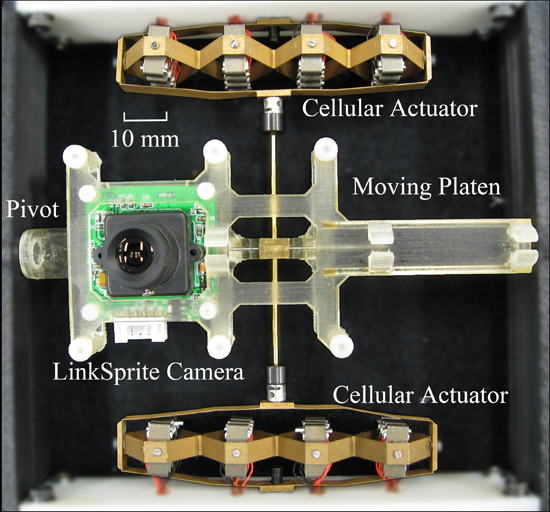 Robots tend to have trouble reproducing the complicated movements of the human eye. Without the ability to mimic the movement of our eyes, engineers have been crafting robots with deadened unnatural eyes for ages but perhaps no longer. There are definitely other issues and obstacles but now researchers at Georgia Tech have finally crafted robotic cameras with seemingly natural eye movement thanks to the piezoelectric cellular actuators used in the design.

But what exactly is a “piezoelectric cellular actuator” anyway? Well, piezoelectric materials are able to expand or contract when current is applied which can turn signals into motion in the actuator. These materials have been used for a number of applications previously but their use in robotics was limited due to the nature of the material’s flexibility. And yet the good folks at Georgia Tech have managed to work out a new way to squeeze more out thanks to concept built around biological muscular structure.

The research is being conducted by one Joshua Schultz with the help of assistant professor Jun Ueda. Schultz is quoted on the Georgia Tech website with a summary of the development:

The actuators developed in our lab embody many properties in common with biological muscle, especially a cellular structure. Essentially, in the human eye muscles are controlled by neural impulses. Eventually, the actuators we are developing will be used to capture the kinematics and performance of the human eye.

The variety of applications for a robotic eye that functions like a human’s are near endless. From more lifelike robots to guided surgery, the future looks bright.

(Georgia Tech via The Verge)