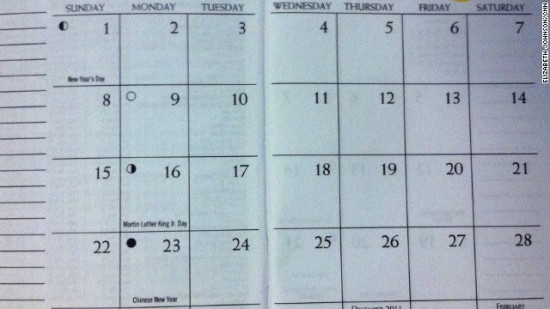 A problem many people tend to have is that we never know either what day or date it is, only eventually realizing what day it is because a certain television show we watch is airing that night, and only knowing the date when we pull out our phones and check. Not that big of a problem, but who’d say no to being a little more competent regarding, you know, when we’re existing. Two professors at John Hopkins University, astrophysicist Richard Conn Henry and applied economist Steve Hanke have proposed a calendar in which every date falls on the same day as it did the year before.

Not the most helpful improvement to space and time, though not entirely unhelpful. A world where Father’s Day always falls on a Thursday or your mother-in-law’s birthday always falls on a Saturday might slightly improve the quality of your life, in that you might be more inclined to remember these important dates. Henry notes that a kind of static calendar would make schedule much easier:

“Think about how much time and effort are expended each year in redesigning the calendar of every single organization in the world, and it becomes obvious that our calendar would make life much simpler and would have noteworthy benefits.”

The calendar year would have a total of 364 days, with every third month having 31 and the rest of the months having 30. The new system would forget about 366-day leap years entirely, and replace them with an extra week in December every five or six years. Aside from the extra added week every now and then, the team claims the calendar is different from alternative calendars proposed in the past because it keeps each week at seven days, leaving our lives relatively unaffected aside from that extra week in December.

Aside from work schedules, Hanke cites that drug prescriptions could be made more accurate under the new system, as well as sports scheduling, something sports fans know many leagues put a lot of work into before each season, and always ends up with a few scheduling anomalies nonetheless. On top of that, Hanke suggests that schools could also stop spending so much effort devising their schedule for the year.

Aside from the new calendar, the duo has also proposed to eliminate time zones in order to better streamline international business.

Regarding actually getting the new calendar accepted and literally changing the way the world views time, Hanke realizes it’ll be difficult, but is optimistic:

“Our job is to get the science right and get the idea ventilated, and make the argument and do the advocacy if it’s necessary, and let the chips fall where they may.”

So, how do you feel? Do you want your birthday to always fall on a Wednesday?