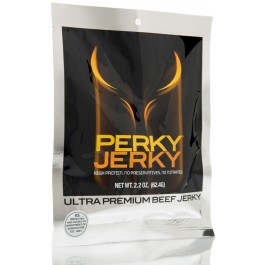 A few weeks ago, we learned of the existence of a beef jerky and potato chip hybrid, but now, we learn of Perky Jerky, a caffeinated beef jerky, for the manliest of manlies, but who don’t get much sleep. There are a variety of ordering options, from 2.2 oz bags to 12 packs, with the option of either beef or turkey jerky.

My first reaction to Perky Jerky was something akin to this, but as a regular gym attendee, I quickly began to think of the working out applications. Though full of sodium, beef jerky is actually a very quick, tasty way to funnel a lot of protein into one’s system after a workout without having to choke down whatever milky substance one obtained from GNC that month, and the caffeinated part would, in theory, provide the energy one would need to work out. Maybe a test run is in order.

The brand’s tagline reads “It’s not just a snack…it’s a lifestyle,” so the shop offers other merchandise, like t-shirts, golf bags, and a very ridiculous suit that can be seen below. 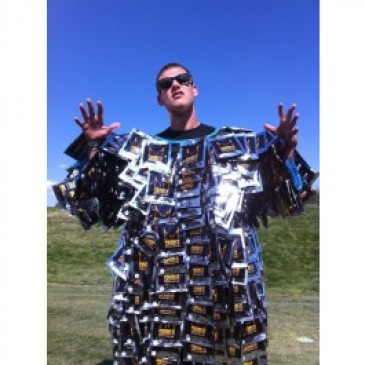 (Perky Jerky via Best Week Ever)