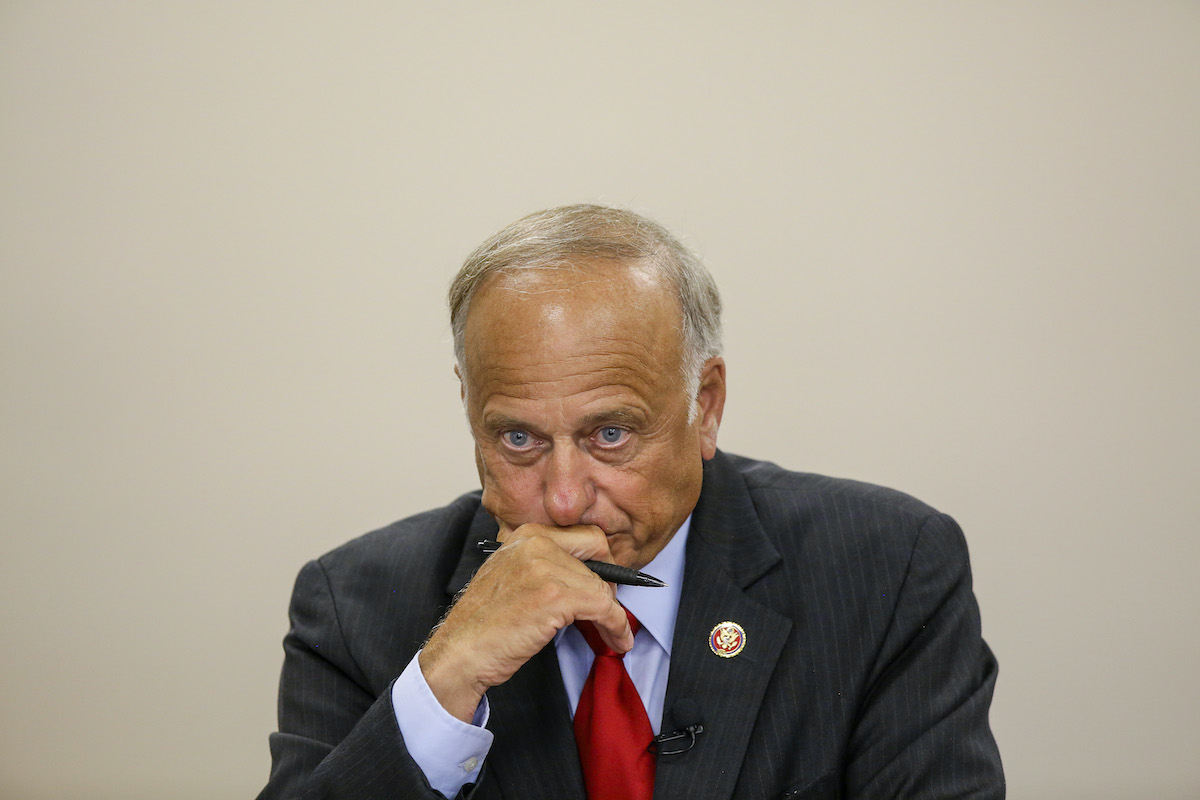 One of the worst people in Congress got voted out last night.

Steve King, the House Republican from Iowa with a long history of saying racist, sexist, and otherwise bigoted things, lost his primary race Tuesday. King spent nine terms in Congress, where he used his platform to promote white supremacy, defend rape as being a boon to society, and compare Mexicans to “livestock” and “dirt.”

He will not be missed.

Goodbye forever Steve King. Hope I never think of you or hear or type your name again.

We actually never need to talk about Steve King again.

The guy who asked how the terms “white nationalist, white supremacist, Western civilization” became offensive can now think about the answers from his garage. Beat it. #steveking https://t.co/59FPpp2pCh

Goodbye, Rep. Steve King. You are certainly not the only white supremacist in federal government, but you were among the most prominent.

It’s a shame Republicans held you up as long as they did.

Unfortunately, there is some bad news here. While Steve King should absolutely not be a U.S. Representative, I regret to inform you that the guy who beat him is also truly terrible.

Yes Steve King losing tonight was absolutely good news but the bar for “better than him” is somewhere in the Earth’s mantle https://t.co/PYuJ0LYWZb

King lost the five-way primary race to former state Senator Randy Feenstra. Feenstra’s congressional campaign site boasts his endorsements from both the NRA and the anti-abortion National Right to Life. In fact, he didn’t beat King by calling him out for being terrible, but by claiming he wasn’t effective enough in that terribleness.

As King himself noted in his concession speech posted to Facebook, none of his four opponents “have raised an issue with a single vote I put up or a single statement that I have made.”

How? Well, he lost the GOP primary to a man who attacked him on airwaves for not being an efficient enough lawmaker to get Trump’s wall built. #IA04

Steve King can’t make the trains run on time!, is what did him in.

So now Feenstra will run in the general election in November against Democrat J.D. Scholten. Scholten, who ran unopposed, almost beat King two years ago. Since then, King was stripped of all of his committee assignments after he posited the question to the New York Times: “White nationalist, white supremacist, Western civilization — how did that language become offensive? Why did I sit in classes teaching me about the merits of our history and our civilization?”

That’s the kind of thing the Republican Party tries not to say out loud, choosing instead to just quietly use it as the foundation for their policies. So King was looking especially vulnerable in this year’s reelection. Feenstra, meanwhile, has all of the awfulness of King, but is much more likely to beat Scholten in Iowa’s most conservative region.

My condolences to Steve King for losing last night’s primary racist. I did Nazi that coming. At least now he klan spend more time being a white supremacist with his family.