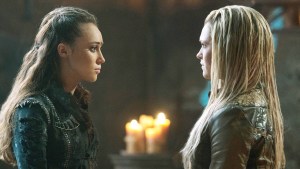 There’s been an uncomfortable trend of TV deaths lately, most of them dominated by female characters. Out of those women on-screen, there have been an unfortunate number of lesbian and bisexual characters who have met their end. While television’s treatment of queer characters has been an ongoing issue, it has faced bigger scrutiny in recent months from LGBTQIA fans and creators alike–eventually leading to the devising of the “LGBT Fans Deserve Better” pledge (also shortened to #TheLexaPledge).

The pledge features seven tenets which promise to showcase more positive storylines for queer characters, for example not killing off a queer character “solely to further the plot of a straight one”. Unfortunately, television has a long track record of poorly treating its LGBTQIA characters–but the creators of the pledge are hopeful that this will be a positive change for the future.

When the pledge was brought up during a recent Writers Guild event last week, however, several panelists openly wrestled with the idea that it could actually serve to restrict creative freedom. Faking It EP Carter Covington was quoted as saying that “if a character dies and it had a bad message, I support [the pledge],” but “it’s dangerous to tell the showrunner how to tell a story.”

If anything, the biggest point behind The Lexa Pledge is not to prevent showrunners from being able to do their job. It’s to remind showrunners that they need to put more thought and foresight into their creative decisions, especially when it comes to their LGBTQIA characters. It’s about keeping the issue alive so that when plots and storylines are discussed in the writers’ room, the creative team has that awareness and understanding of the trope that has been very harmful to fans. And it’s about creators acknowledging legitimate criticism and learning how to take that into consideration moving forward, especially if they haven’t lent much thought to these important issues in the past.

Covington’s remarks are a perfect example of the mindset that showrunners and television writers need to move away from. Looking at the pledge as a means of censoring creative freedom is part of the problem. The question shouldn’t be, “How is this going to affect my ability to tell a story?” It should be, “How can I tell this story in a way that serves the character in the best way possible?”