It’s been, to put it mildly, a bit of a stressful year for LGBTQIA TV viewers. Slight spoilers for way too many shows to follow.

From The 100 to The Walking Dead to Jane the Virgin to The Magicians to Empire, the last few months of TV have killed off a staggering number of lesbian and female bi characters. The death of Heda Lexa on The 100 back in March received a particularly notable fan response—viewers incensed over the show’s treatment of Lexa and manipulation of its progressive fanbase protested over social media and used the controversy as an impetus to raise funds for The Trevor Project, an organization dedicated to offering crisis support to LGBTQIA youth.

That backlash from 100 fans lead to unprecedented scrutiny of the way queer female characters are written on TV overall, and most shows did not fare well under that lens. It’s been less than two months since Lexa died, and already six lesbian and bi characters have been killed off on five different shows, many of them meeting their end in plots points that furthered the arc of a straight character or supported the narrative that lady-on-lady love can only end in tragedy.

As a response to the controversy surrounding The 100 this season and the terrible recent treatment of female queer characters, a group of women, many of whom work on the Canadian medical drama Saving Hope, have devised a guideline for writing positive LGBTQ storylines. (Note that The Mary Sue generally uses the LGBTQIA acronym, but that the pledge specifically references only LGBTQ stories/fans—however, its points would be applicable for writing asexual and intersex characters as well.)

The pledge contains seven tenets for positive LGBTQ representation, and the eight industry members who’ve signed it so far promise, among other important points, to “refuse to kill off a queer character solely to further the plot of a straight one”; to “recognize that the LGBTQ community is underrepresented on television and, as such, that the deaths of queer characters has deep psychosocial ramifications”; to “acknowledge that “the Bury Your Gays trope is harmful to the greater LGBTQ community”; and to “never bait or mislead fans on social media or any other outlet.” 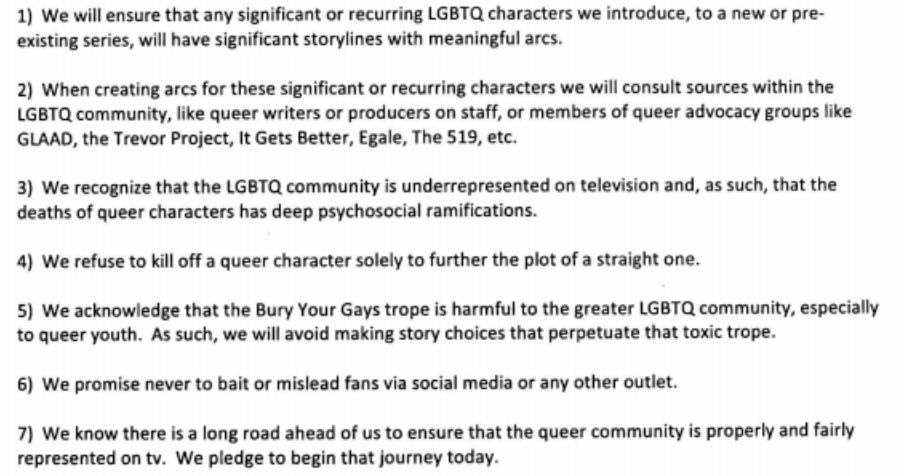 Speaking to us over email, Michelle Mama explained what inspired the pledge:

When my friend Gina Tass contacted me to let me know about the work she had done to raise money for for the Trevor Project in Lexa’s name and the insane outpouring of support, it got me thinking. These kids were hurt and upset and needed to channel this energy and have some way to feel like they were being heard. I said “what if we do something for LGBTQ representation like the Bechdel test?” and it started from there.

I contacted Sonia Hosko and Noelle Carbone who are also queer and work in scripted television and the four of us put our heads together to come up with the pledge.

I’m so thrilled and moved by the response online – kids from all over the world messaging to thank us for taking a stand for them. Here’s hoping the industry sits up, pays attention and signs on the dotted line.

Over email, Noelle Carbone explained “I think people don’t give enough thought or credit to what representation on television can do, both positively or negatively.” She went on to explain the ways positive representation on TV impacted her as a kid:

I grew up in a Roman Catholic Italian household in a blue collar working class town. There wasn’t a whole lot of “otherness” in my life. And as enlightened and progressive as my parents were for relatively new Canadians, our world was pretty small. Shows like The Golden Girls, Roseanne and My So Called Life choosing to tell queer stories — those shows, and those characters, were a godsend. And then Ellen came out and it was like she reached straight into my little corner of southwestern Ontario and said “Hey. It’s cool. See you when you get here.” It took me about five more years to come out, but when I did, my psyche was already buoyed by quite a bit of positive queer representation in the media. I mean everyone loved, still loves, Ellen. My God, her own mother was in her coming out episode. How awesome is that?

Positive queer representation on tv helped me figure out who I was and, more importantly, that it was okay to be me. And it showed my parents that the world wouldn’t end, and that it was possible for me to have a good job (like Will on Will & Grace) and awesome friends (like Willow on Buffy) and maybe even get married (like Carol and Susan on Friends). And sure enough, when I came out my parents were cool and the world didn’t end.

I don’t know what my experience would’ve been like if I was a teenager now and watching queer female characters get shot or stabbed or drowned one after the other after the other. I don’t know how that kind of representation wouldn’t burrow into your subconscious and send a message of pain and futility. Which I guess is why the pledge is getting the response it’s getting online. It contains a message of hope that lots of people, especially young people, need to hear.

Carbone, who reiterated in her correspondence to us that she’s “only 1 of 4 women who came up with the idea” and that equal credit for the pledge “should go to Michelle Mama, Sonia Hosko and Gina Tass,” also suggested resources for creators looking to educate themselves on LGBTQ representation:

I’d absolutely love it if other showrunners and writer/producers signed the pledge. But I know that it’s a complicated issue and not everyone in this industry quite has their head around it yet.

So instead of asking people to sign, I’d rather direct them to the wonderful, albeit alarming, articles that have been circulating. Like Autostraddle’s comprehensive list of every queer female tv character’s death dating back to 1976. And ask them to pay attention to how quickly the bodies start piling up from 2013 onward.

Or the stats they’ve compiled — and turned into colourful graphics so I can understand them — referencing how only 11% of series have queer female characters in them. And of that meagre number, more than a third of them have killed off one or more of those queer female characters. So to put it in terms non-math brains like me understand, that’s like there were 11 queer female characters standing in a crowd of 100 people and then 3.85 of them dropped dead or were murdered. And we all watched it happened on tv. I think that’s pretty twisted no matter where you stand or what your background is.

One benefit to this trash fire of a TV season is that it’s demonstrated the importance of media criticism and the power of fandoms. Writers from The 100 specifically have expressed gratitude to fans for educating them on positive representation, and although it shouldn’t be the responsibility of marginalized people to teach creators about the fraught history of queer representation, I’m optimistic those interactions can still lead to positive change.

I see #TheLexaPledge as further proof of the power of passionate fandoms. The writers state in the pledge that “it took us a little while to truly understand the outpouring of criticism being directed at the shows in question—series we love that have showrunners we respect.” But thanks to the efforts of devoted fans and critics, they not only understand now where that criticism comes from, but have created a pledge that, if adopted by others within the industry, has the potential to hugely impact the way queer ladies are depicted on TV.

Obviously, this is only a small step in the right direction, and it’s indicative of how bleak the last few months of teevee have been that I’m stoked about only eight creators committing themselves to responsible representation. It’s also important to reiterate that other identities from the LGBTQIA spectrum are just as deserving of positive representation as lesbians and bisexuals are, and are also chronically underserved.

Like the pledge says, positive representation is a long journey. There’s a lot of hate to undo. But the passion of fans and the concern of creators like these make me tentatively optimistic for what the future holds.

UPDATE: Gina Tass, one of the four women involved in creating the pledge, sent us a statement in which she says she plans to approach creators on other shows about #TheLexaPledge:

On my end, which is not from an industry insiders perspective, there are many concerns on how to be directly heard by show-runners, to find the best way to create change and to prevent what happened on The 100 from occurring again. The best and most positive way I found after hearing the stories of many behind this movement was to make show runners aware of the issues in front and behind the scenes. It is one thing for us to say it; quite another for industry peers to say it.

After I created The Trevor Project fundraiser, the donation page was filled with comments and stories from so many donors who were hurt, angered, and felt they were being ignored. It was then I engaged with LGBT fans deserve better and so many voices supporting the movement in discussion about “the bury your gays trope” which has had such a negative impact in the LGBTQ community for so long. The general concern which threaded the voices through all this heartfelt communication was that one of the main goals was to manage better future representation in T.V media. LGBTQ particularly the more seasoned of us, have lived in a bubble of indifference for so many years. It was after interacting with the youth behind LGBT fans deserve better and watching its incredible impact that this indifference was broken. That was huge for myself in particular.

For me, positive representation means being able to see LGBTQ lives mirrored on-screen with respect. LGBTQ youth deserve to grow watching loving, supportive, relationships/ friendships/partnerships between LGBTQ characters without having to worry that one will end up deceased to further storyline or to be simply used as a plot device. They deserve to not have to fall victim to the “bisexual trope” in which the girl always ends up with a man in the end, it is important to address this going forward as the two tropes often go hand in hand. They deserve to know as LGBTQ they can have friendships outside of their own community which are safe and fulfilling without judgement or ridicule. Mostly, as a therapist, I wanted to make sure the youth had one less reason to harm and fall into despondency. This was my train of thought when working with Noelle, Sonia and Mama on creating the Lexa pledge.

LGBT fans deserves better and myself do plan to approach other show runners and creators who include or are thinking of including LGBTQ representation in their stories. We will do this with the same positive approach that has brought so much attention and education to the issues we face as a community. I feel this positive approach has been the main reason for its success.

I also encourage anyone who is seeking to gain more knowledge on the movement, or to simple further their understanding of the issues at hand to visit LGBT Fans Deserve Better there they can also find wonderful fan testimonials and access to the show-runners/writers who have signed the Lexa pledge and are ready to take the next step with us in our journey towards better LGBTQ representation.