Squirrel Hit With Bullet and Lives | The Mary Sue

Bulletproof Squirrel Most Hardcore of All Squirrels

Pics or it didn't happen? Oh, we've got pics. 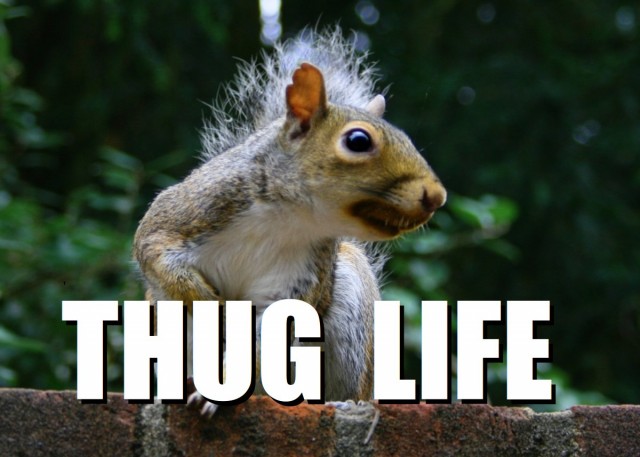 We’ve talked about the hellscape squirrels will launch us into when they disable our electrical grid. Some of you might think, “Well why don’t we just shoot all the squirrels?” Nope! You can’t, because squirrels don’t care about getting shot. At least this one squirrel doesn’t. He was hit with a bullet and just keeps right on squirrelin’.

Squirrel John McClane was spotted by wildlife photographer Christine Regusa. She first noticed Squirrelsputin when looking over photos she’d taken in her backyard, when sure enough, there was a photo of a squirrel with a bullet lodged behind it’s front squirrel-leg. ABC News has the pics in this video segment:

Regusa says she’s not sure how the squirrel was shot — we assume it was with a gun — but she says it doesn’t seem to mind having been shot all that much, and it appears to be scampering and doing squirrel stuff like any normal, non-bullet-laden animal would.

This is either the most badass squirrel that’s ever scampered the Earth, or it was a regular squirrel once, got shot, died, and now it’s the first zombie squirrel. We don’t see any non-terrifying options here.

A quick message for whoever shot this squirrel: Rule #2. The Double Tap.

Stay safe out there, everyone. Looks like the squirrel menace has escalated to Threat Level: Midnight.