#WhyBuffyStayed: Buffy the Vampire Slayer, Riley, and the Cycle of Abuse 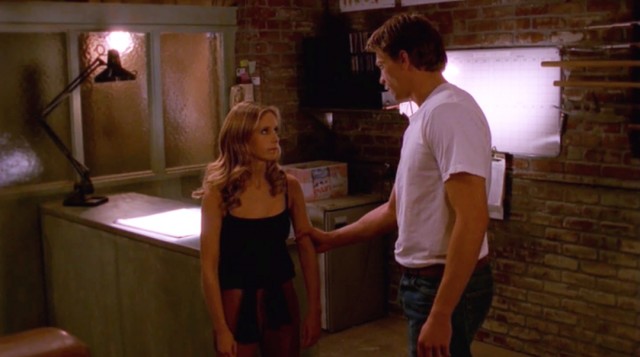 It shouldn’t have to be necessary for someone to punch his girlfriend in the head with enough force to render her unconscious in order for domestic violence to be a part of the national conversation, but, unfortunately, it is. One of the more visible manifestations of the dialogue surrounding former Baltimore Ravens’ running back Ray Rice and his abuse of then-fiancée (now wife) Janay was the hashtag #WhyIStayed, in which people shared their stories of why they stayed in abusive relationships.

So… why? Obviously, each case is different, but it’s no stretch to say that women stay in abusive relationships at least partly (I believe largely) because our culture tells us to. In a thousand different ways, beginning with “he only makes fun of you because he likes you,” women are instructed to see acts of coercion, aggression, and violence as romantic. Instead of as abuse, women are taught to see these actions as simply the result of true passion and love. Because of this, it can be extremely difficult for a woman to recognize an abuser before she is trapped in the Cycle and left with little or no option for escape.

Sadly, one of my favorite shows, Buffy the Vampire Slayer, is guilty of spreading this dangerous myth. There are so many moments through the show that are worth standing up and cheering for, but in season four—acknowledged even by fans as anything from “mediocre” to the “absolute worst”—Buffy ends up in an abusive relationship that the writers consistently portray as romantic, passionate, and loving.

There are issues with Buffy’s relationship with Riley from the very beginning, but Riley’s abusive tactics are most clear in two episodes: “The Yoko Factor,” from season four, and “Into the Woods,” from season five.

In “The Yoko Factor,” after Xander inadvertently reveals how Angel lost his soul, Riley immediately shows signs of suspicion and distrust against Buffy, which seem to be coming from his feelings of emasculation (he lost his position with the Initiative) and what he sees as “unrequited love” in their relationship. When he expresses his “knowledge” of how Buffy had cheated on him—a conclusion he came to with absolutely no evidence whatsoever—she asks him why he’d jumped to that conclusion.

“Because I’m so in love with you I can’t think straight.”

Buffy’s reaction is to visibly soften, to smile, to get a little teary-eyed. It’s all supposed to indicate that she is deeply touched by his declaration. Except his declaration is an attempt to rationalize and justify his over-reaction, his suspicion, and his condemnation. He hears about his girlfriend’s previous sexual relationship and he goes off the deep end, immediately assuming her previous experience guarantees her infidelity.

This reaction is not healthy, and it has the earmarks of an abuser; it’s incredibly common for abusers to accuse their partners of cheating, and jealous behavior is often one of the first signs of an abusive relationship. However, the writing, the directing, and the acting all builds to the conclusion that this is not abusive—no, this is romantic. He goes “crazy” because he’s in love.

The next dozen episodes chronicle Riley’s descent into darkness. After Spike reveals Riley has become a vampire thrall, Buffy distances herself from him because of his betrayal. However, in the last few minutes of “Into the Woods,” Riley’s actions change from questionable, unhealthy, and coercive to outright abuse.

He refuses to respect her boundaries, forcing a conversation Buffy makes clear she does not want to have. He manhandles her, grabbing her and using physical force to compel her attention multiple times. He blames her for Dracula’s attack in the season five premiere (considering the historical connection between vampirism and sex, the “Dracula” episode serves as a metaphor for sexual assault) and admits to wanting revenge on her for “letting” Dracula bite her. He superficially acknowledges becoming a thrall was his fault, but nonetheless shifts responsibility for his actions onto Buffy—if she’d just expended the effort to convince him of her love, he wouldn’t have done it. Then he then outlines all of the ways that she could have “proved” her love for him. Finally, he hands her an ultimatum: unless she “gives [him] a reason to stay,” he’s leaving that night.

This is what an abuser does. They accuse and vilify their partner in a dedicated effort to justify their betrayals. They victim blame, they slut shame, they center on their emotions and what they feel they deserve. They use force – physical, verbal, or otherwise – to get what they want.

Through the entire conversation, Buffy’s reaction is spot on. She refuses to excuse him manhandling her, she exerts her autonomy, and she does not accept his blame shifting. This could have very easily been one of those “stand up and cheer moments” of the series, but, instead, the writers took Buffy’s independence and Riley’s abuse and subverted it.

At the end of the episode, Xander—who has had his problems with consent violation and coercive tactics—convinces Buffy that Riley was right, that Riley’s feelings were justified, that Buffy had wronged Riley, and she was losing the love of a lifetime.

We had just seen Riley use almost every abusive tactic in the book, but, again, the writers and directors and actors portray his choice to use violence and coercion to try to get what he wanted—regardless of what Buffy wanted—as an ultimate act of true love.

And we’re surprised when women stay in abusive relationships?

Every abusive relationship has the “honeymoon”—the repeated periods in the Cycle of Violence when the abuser pulls out all the romantic stops, when they say things like “I’m just so in love with you I can’t think straight” and do everything they can to convince their victim that they’re just so passionately in love they cannot help themselves. If abusive relationships were always filled with violence and hatred and anger and blame, no victim would stay. Instead, abusers take advantage of the lies of our culture to persuade their victims that what they’re doing isn’t abuse, it’s love.