All the no in the world. 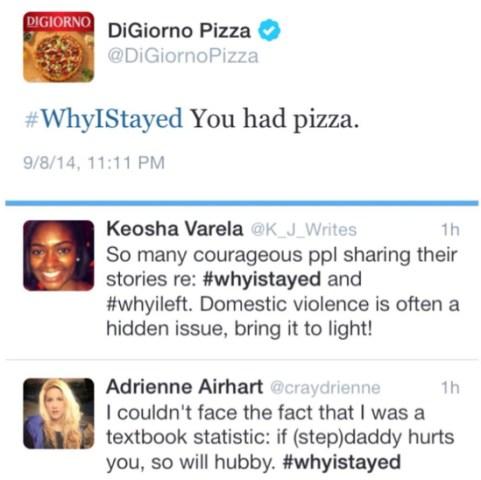 Oof. The #WhyIStayed hashtag, if you’re unfamiliar, has been a place for Twitter to examine issues of domestic abuse after video of (now-former) Baltimore Ravens running back Ray Rice beating his then-fiancée (now wife) Janay Palmer hit the web. DiGiorno Pizza very much not realize that when they tweeted the above implication that you would stay with an abusive partner because they have pizza. To their credit, DiGiorno immediately deleted the tweet and apologized, both en masse and to individual users:

A million apologies. Did not read what the hashtag was about before posting.

@KevinPriceLive It was an awful and careless mistake I can’t apologize enough for making. I am so sorry. — DiGiorno Pizza (@DiGiornoPizza) September 9, 2014 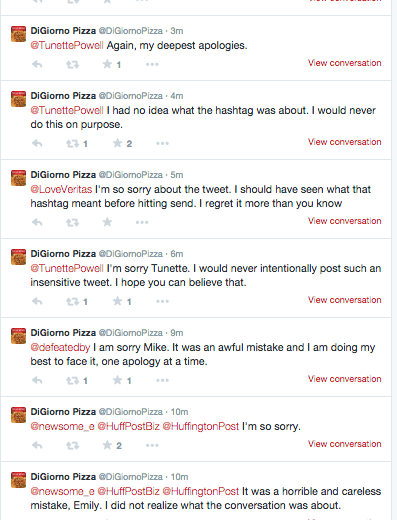 See, this is why you do your research before you tweet.

Janay Palmer, now Rice, responded to the media uproar surrounding the video and her husband’s subsequent suspension from the Ravens, saying on Instagram:

“I woke up this morning feeling like I had a horrible nightmare, feeling like I’m mourning the death of my closest friend. But to have to accept the fact that it’s reality is a nightmare in itself. No one knows the pain that [the] media & unwanted opinions from the public has caused my family. To make us relive a moment in our lives that we regret every day is a horrible thing. To take something away from the man I love that he has worked his ass of for all his life just to gain ratings is horrific.

THIS IS OUR LIFE! What don’t you all get. If your intentions were to hurt us, embarrass us, make us feel alone, take all happiness away, you’ve succeeded on so many levels. Just know we will continue to grow & show the world what real love is! Ravensnation we love you!”

In related news, EA is scrubbing Ray Rice from Madden 15 with this week’s update:

Source tells @FOXSports1 that @EASPORTS will remove Ray Rice from Madden ’15 as part of Wk 1 update. Won’t be on Ravens or free agent lists.

Confirmed with EA that Ray Rice will be removed from Madden NFL 15. Rosters will be updated by Friday. — Brett Molina (@brettmolina23) September 9, 2014

The world continues to be a horrible place.

(via Pajiba, Kotaku, For the Win)