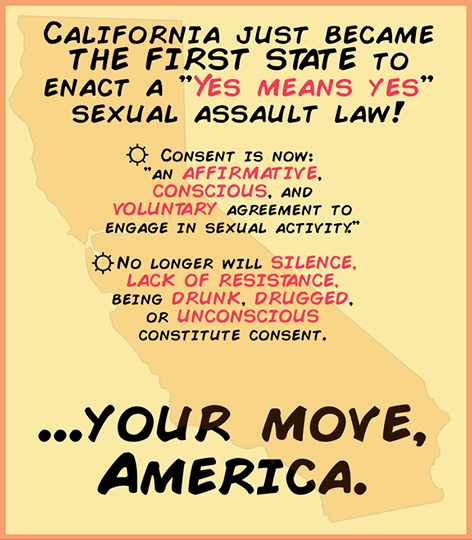 Today just got exponentially better: according to The New York Times, California Governor Jerry Brown signed our nation’s first ever “Active Consent Bill” yesterday, a landmark law that will enforce “yes means yes” legislature at state universities and universities where students are eligible for state grants. According to the new Bill, consent is now recognized as “an affirmative, conscious, and voluntary agreement to engage in sexual activity”–silence or a lack of objection do not qualify as consent.

As was the case earlier this month when we wrote about Kansas City’s potential anti-catcalling legislature, California’s landmark ruling is bittersweet–while I’m overjoyed that the State is setting such a positive precedent for the rest of the country, it’s of course disappointing that our species would even need legislature to remind us that, for example, incapacitated silence is not the same thing as a “yes.” As an example of the need for legislature addressing rape culture, similar rulings passed recently by universities (but not reinforced by the state) have met with resistance; Rush Limbaugh even objected to Ohio State University’s consent law by claiming the legislature “takes all the romance out of everything.” Well, eat my shorts, you sentimental asshole. Today is a good day.

California lawmakers passed the bill last month, but it wasn’t enacted until the Governor gave it his signature yesterday. In addition to combatting on-campus sexual assault by emphasizing the correct definition of consent, the new legislature also states that victims who report sexual assault will not be punished for under-age drinking; all applicable universities are also now required to offer on-campus advocates for victims and to teach incoming students about sexual assault and consent.

In the words of sex education vlogger Laci Green, “Your move, America.”

(via The Wire, image via Laci Green on Twitter)