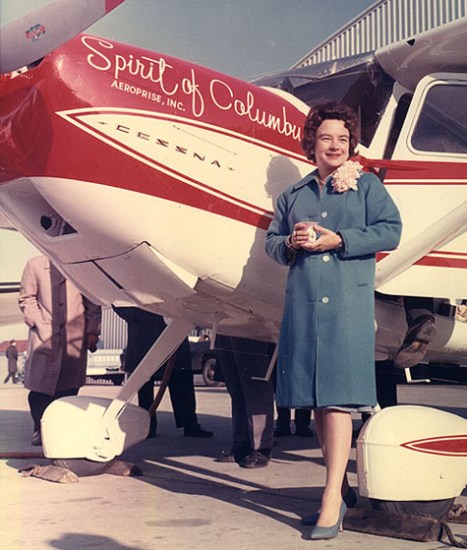 Geraldine “Jerrie” Mock hails from Newark, Ohio and made a historic solo flight around the world that landed in Columbus in 1964. The trip took 29 days, with 21 stopovers, and made Mock one memorable lady. Now, residents in her hometown, as well as other admirers, would like to honor her with a full-size bronze statue. They just need a little help raising the funds. And if you can believe it, Mock is surprised anyone would want a statue of a woman.

Mock, 86, spoke with the Columbus Dispatch about the honor. “I guess I don’t think about women and statues,” she said. “They’re for generals or Lincoln.”

She may not have won a war or run our country but Mock certainly made an impact on the world. “Media in the 1960s had described Mock, who first flew at age 12, as a ‘petite Bexley housewife’ as her adventure was tracked by people around the world who wanted to see if she could accomplish the feat Amelia Earhart attempted as she disappeared over the ocean,” writes the paper. She was the only girl in the engineering class in her high school but was dedicated to flying. “Her single-engine Cessna — flown nearly 23,000 miles — hangs in Dulles International Airport near Washington, D.C., and her trip is commemorated with a plaque on the Tallahassee Regional Airport’s Aviation Wall of Fame in Florida.”

Mock was also awarded the Louis Blériot medal by the Fédération Aéronautique Internationale and the U.S. Air Force named a street after her at the Rickenbacker International Airport in Lockbourne, Ohio. She was working at the Columbus Airport at the time she decided to take her flight and even took time to see the pyramids and ride a camel in Cairo along the way, which besides flying, was one of her childhood dreams.

“I never gave it a thought that she wouldn’t be successful,” said her sister, Susan Reid. “We knew she was a great pilot, lots of guts. And this was a pretty gutsy thing to do.” The paper noted that Reid is hopeful Mock woud visit Ohio for the unveiling (she currently resides in Florida) but that she probably wouldn’t fly a commercial airline. “She wants to know the pilot,” said Reid.

Supporters have raised about half of the $45,000 they’d need for the statue. Donations to the Jerrie Mock Aviation Pioneer Sculpture Fund can be made to the Licking County Foundation, P.O. Box 4212, Newark, OH 43058. You can read more about Mock’s amazing story, including her race to beat another woman pilot to the punch, at WomenAviators.org.