But is it actually Broadway HD, or British Theatre HD? 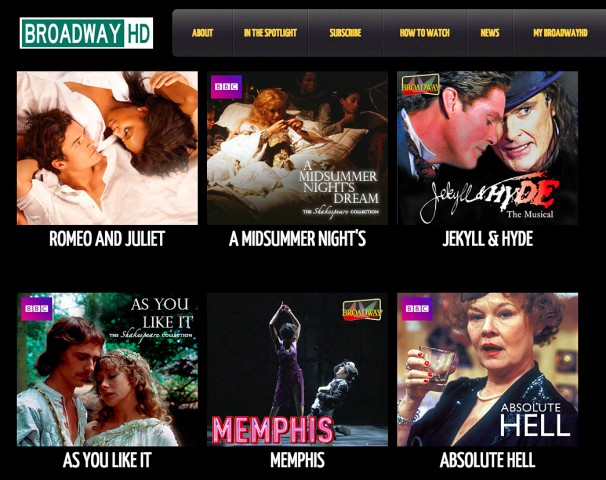 Theater nerds, rejoice! Following the example of the UK’s Digital Theatre, Broadway producers Stewart F. Lane and Bonnie Comley are bringing us a brand new theater streaming service, Broadway HD. While it can never replace live theater, it will provide access to those who can’t get to Broadway (as well as allow you to relive Broadway productions over and over without the hefty ticket prices!)

Setting up a profile on Broadway HD is free, and will allow you to enjoy theatrical productions in two ways: either as part of a monthly subscription granting unlimited access, or you’ll be able to rent individual shows. The service already boasts a library of more than 100 shows, including Broadway hits like Memphis and Jekyl and Hyde, as well as shows from London’s West End.

And there, as Hamlet would say, lies the rub. Looking over the site and its options, I noticed that most of the available shows seem to come from the BBC. Now, don’t get me wrong – I’m a huge Anglophile, and I love British theater – but I was excited about Broadway HD precisely because I was looking forward to having access to American productions the way I already had to English theater through the Digital Theatre service. And I know that most, if not all, Broadway shows are recorded for posterity at the New York Public Library of the Performing Arts. So, footage for every show exists and is viewable. It’s probably just a matter of rights, or how old a show is, or whether it’s touring.

In any case, I hope that Broadway HD eventually makes more recent, American productions available. Right now, I’m starting a free account and renting show-by-show. If they start making more of the shows I want available, I’ll happily spring for a monthly subscription.

What do you think? Will you be trying Broadway HD?