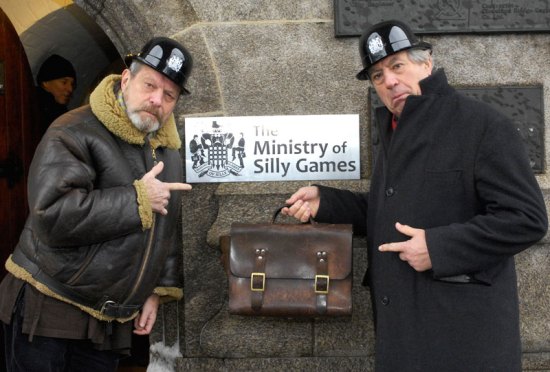 We can’t be the only people in the universe who ever took a crack at the computer game Monty Python’s The Meaning of Life, but judging by its comically sparse Wikipedia page, we don’t have much company.  To summarize: imagine that Myst took place in a setting made out of every Monty Python sketch ever.  Those same puzzles based on figuring out the underlying logic of the setting are now based on the logic of the Dead Parrot sketch or similar.  Now, imagine that just as you think you are completing the game by assembling all the ingredients for salmon mousse; you instead unlock the second half of the game, which takes place in a completely different setting that makes the last one look as straight forward and causal as a Dick and Jane book.

Which is why if Monty Python makes a game, even a Facebook game, we are down for that.

Which is exactly what they are doing.  Terry Gilliam and Terry Jones announced the making of The Ministry of Silly Games, which seems to be a social gaming hub where players will be able to walk around various Python themed settings in various Python themed avatars completing Python themed quests, but more concretely, there will also be a host of minigames that involve feeding Mr. Creosote, and shooting Upper Class Twits, and sparring with the Black Knight.