Game Of Thrones Brienne Not Pretty Enough | The Mary Sue 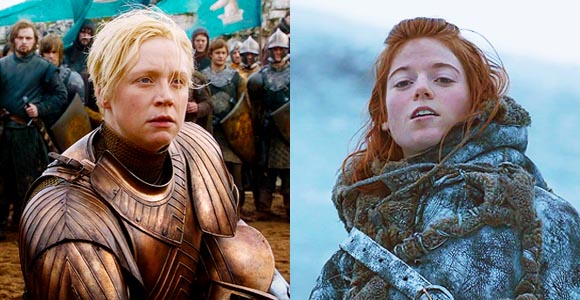 Entertainment Weekly is doing 15 days of Game of Thrones coverage and they started with two of our favorite ladies – Gwendoline Christie, who plays Brienne on the show, and Rose Leslie, who plays Ygritte.

EW harkened back to when Christie was first cast in the role. Brienne is a character described as tall, muscular, and all around unattractive in George R.R. Martin’s books and many thought the actress didn’t fit the bill. EW related her thoughts on that:

“All my life, all I’ve ever wanted is for people to say — first of all — I’m pretty. But ‘too pretty’? Is amazing,” she says. “I also loved that they said, ‘Who’s this model?’ I only ever wanted to be a model. This acting thing — three years of drama school — is an accident! I was like, ‘Wow, they think I’m a model?’ I didn’t mind it at all. I knew all the things I wanted to do to become the part. I’ve always been able to look very different very easily.”

The 6′ 3″ actress also spoke with New Zealand’s Stuff about training to play Brienne. She apparently took up kickboxing, quit drinking, lost weight and put it back on in muscle. “What I think is so brilliant about this show is that it takes an outsider and an archetype which isn’t often seen – the extremely tall woman who has strength that can match that of her male counterparts – and explores that,” she said, also adding, “I’ve been taught how to break a man’s nose with my elbow.”

Of course fans don’t seem to have any complaints now that they’ve seen Christie in action. Leslie, on the other hand, has faced a different challenge – not being Ygritte enough when meeting fans. Her character’s catchphrase: “You know nothing, Jon Snow,” is what’s tripping her up. Fans often ask her to say it when they meet her in person. She told EW:

The only annoying part of the whole business, she says, is that fans tend to be disappointed by her delivery. “I use a different voice — I put on an accent on the show — so when I say ‘You know nothing, Jon Snow’ in my own voice you get a furrowed brow from fans and they’re like, ‘That doesn’t sound like Ygritte.’ And then I got to go into [her character’s] accent and do it and it’s a really long boring process for the fan and I’m sure they walk away wishing they hadn’t asked me because it’s such a kerfuffle.”

“Women in Game of Thrones have a harder job because they’re existing within a man’s world,” Christie told Stuff. Looks like it’s the same for GoT actresses as well.