Brie Larson Is Making Some Star Wars “Fans” Big Mad, Which Is Both Delicious & Sad 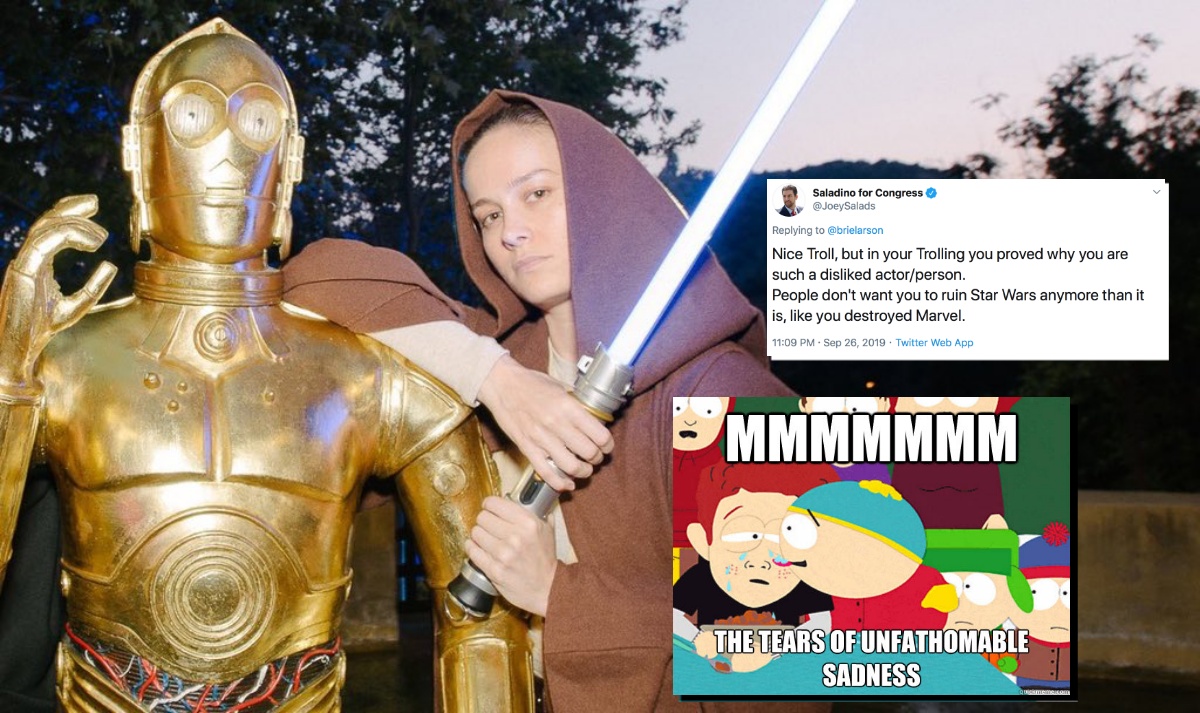 Actress Brie Larson posted a picture of herself dressed like a Jedi, holding a lightsaber, and standing next to C3PO on Twitter—just a normal thing to do when you’re part of the Disney brand and have access to all the things. Yet, seeing Brie Larson around something nerdy made some people on the internet very, very upset (again). The degree to which Brie Larson’s activities upset people is truly astounding to me because, man, is she not doing anything but living her absolute best life.

Did someone say Star Wars?! pic.twitter.com/e6vVm5wW2p

Now, I know that Captain Marvel rustled some feathers, because how dare she be outspoken about wanting more diverse movie critics to get access to films in a field that white men dominate? But at the same time, I always feel slightly surprised when people are still upset about it, especially people who claim to be anti-“snowflake” like “YouTube prankster” Joey Salads, a name I only know from him getting owned by YouTuber h3h3. Apparently, Joey Salads is running for Congress now, but he posted to Twitter, in response to Larson, saying that she is a troll and that “people don’t want you to ruin Star Wars anymore than it is, like you destroyed Marvel.”

Nice Troll, but in your Trolling you proved why you are such a disliked actor/person.
People don’t want you to ruin Star Wars anymore than it is, like you destroyed Marvel.

Yes, because Endgame just suffered so hard under the weight of Larson’s feminist agenda. That’s why it, despite being over three hours long, made so much damn money. Still, what irritates me about the attacks on Larson is how the hatred towards her is always framed around her being “too political” and having a “feminist agenda,” when Chris Evans is right there tweeting things like:

While making it clear that he DOES really want to be in Star Wars (which we also want, so Chris Evans, thank you so much for knowing your audience and what we need. Make America’s Ass a Sith.)

Chris Evans is on Twitter almost every day being political, making his leftist opinions and his disdain for hard-right propagandists known. Yet, no one is saying that his leftist, socialist agenda is ruining Steve Rogers or the Marvel Cinematic Universe. People are mostly content to love Steve and disagree with Evans’ politics despite him being equally loud. Do you really think Chris Evans isn’t feminist? Do you think that just because he doesn’t vocalize it as loudly, he hasn’t made it clear that he’s not on your side? At this point, anyone saying that their disdain for Brie Larson is because she’s promoting an “agenda” is just pretending not to be paying attention. Everyone is promoting an agenda. It’s 2019.

Hell, the MCU promotes an agenda!

It’s also funny to see people claim that Brie Larson would join the Star Wars franchise only for the money (as if that’s something new and acting isn’t a job) and that she is doing this intentionally to “ruin” things for longtime fans. First of all, Star Wars hasn’t been a niche thing since its inception. Star Wars is one of the most successful franchises on the planet and has spawned several movies, television shows, comics, and video games. People who are not traditionally nerdy like Star Wars. It’s the Little Caesars of science fiction, and I mean that in the best way possible. Of course Brie Larson is into it. Everyone is into it. There’s no exclusive club to protect here.

Hell, Captain Marvel wasn’t even Larson’s first comic book movie, but this kind of gatekeeping often happens to female talent. Olivia Munn is a very knowledgable nerdy actress, but her credentials will always be questioned, while plenty of male screenwriters and directors who say they’re fans of the comics make movies that show that even if they did read the comics, they didn’t get the overall story.

I may not love the movie Captain Marvel (it’s fine), but I do enjoy the fact that Larson respects the role she’s playing, by not catering to people who already don’t think she belongs there. You wanna drop Star Wars if she’s in it? Go off, but please don’t think that you are hurting Brie Larson or Disney or Star Wars. All you are doing is exposing the fact that her being loudly political specifically about women and diversity bothers you, since you have allowed all the other politics of every other superhero actor to slide.

Also, if male screenwriters are the only ones writing Star Wars movies, and they are spreading a feminist agenda … then has the agenda won?