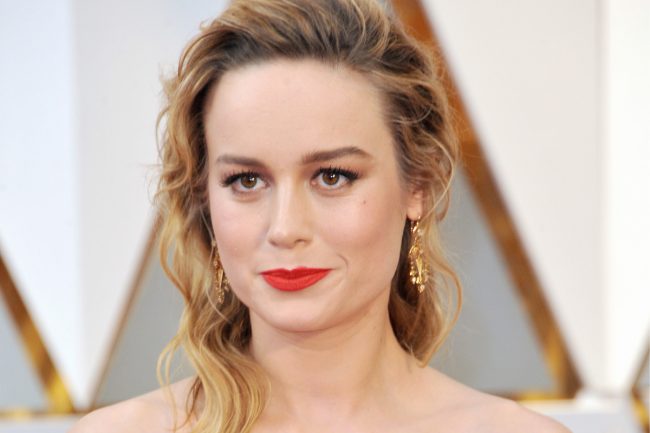 It’s been a big week for high-profile men getting called out for disgusting behavior. Harvey Weinstein’s decades of sexual harassment and assault have finally crossed the threshold from open secret to just plain open. Buzzfeed’s article on Milo Yiannapolis and Brietbart revealed horribly sexist emails from, among others, a now-fired Broadly editor and a Silicon Valley writer. And multiple women have come forward with stories of being harassed by Screen Junkies creator Andy Signore while working for him.

Anyway, here’s the whole story about how the @screenjunkies guy wanted to jack off in front of me pic.twitter.com/wpKlXT2fgN

Yet every time a woman speaks out about being harassed/assaulted/discriminated against, there’s an army of voices waiting to scream her down, to tell her what happened was her fault, or that she’s lying about it entirely.

In addition to being an Oscar-winning actress and our Captain Marvel, Brie Larson has a fantastic Twitter presence. She uses her platform to both speak out about important issues, and to listen and learn from fans. She’s also one hell of a troll when she wants to be. This week, she tweeted out a statement about the importance of believing women.

As always, I stand with the brave survivors of sexual assault and harassment. It's not your fault. I believe you.

Just a few minutes before that, though, she tweeted had out a few words about what women encounter on a daily basis.

I merely smiled at a TSA agent and he asked for my phone number. To live life as a woman is to live life on the defense.

A lot of people related to her story of being approached in an inappropriate setting. Plenty of others, though, didn’t get why she was upset and pulled out the old “well when can men talk to you?” card. (Tip: A lot of times and places, but definitely not while working security in a context where you might have any authority over the woman’s body.)

In that situation he is a man of authority. Imagine if a cop asked for my number after pulling me over. It's inappropriate.

Or maybe it was him.

I'm talking about a man who works in security. I was walking through security. It's inappropriate.

What you are saying is "I was asking for it" – a phrase that has disregarded a females experience for….the whole time.

You do realize you're blaming me for a situation I did not ask to be in? A situation that made me uncomfortable?

I hope you take the time to learn more about the experiences of women. It's real + scary sometimes and people like you can make it better

After handling those dismissive comments with an impressive amount of patience and grace, she addressed how they serve to highlight her entire initial point.

My recent tweets were an invitation to hear my experience as a woman. Are you up to learning something that may challenge your current view?

First step: listen. I don't need you explain why my experience is invalid. I need you to listen because I am not a liar and I have a soul.

Second: ask questions. If you don't understand, believe in us enough to learn more. This can be challenging if our perspectives differ.

Third: speak from a place of love. Remember that we are (hopefully) just trying to make the world a safer place for all.

Fourth: social media can broaden your world view. It can bring us together to learn. Don't miss this opportunity to grow in unexpected ways