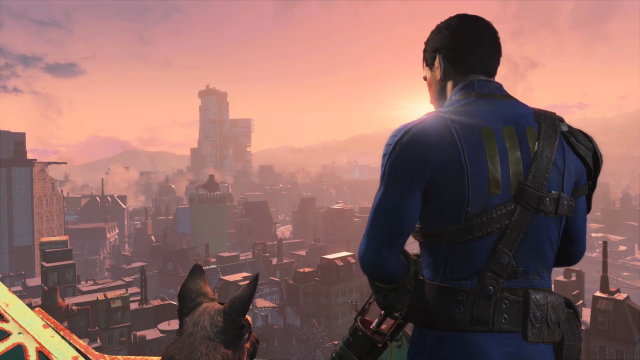 Beating Fallout 4 requires some virtual bloodshed no matter what. You can’t complete a truly pacifist run of the game — but some devoted players have found some creative work-arounds in spite of that. Kyle Hinckley recently completed a “no-kill run” of Fallout 4 on his YouTube channel, The Weirdest — but even a “no-kill” run still involves some killing by proxy.

To clarify, Hinckley’s character didn’t personally kill anyone, but she did stand idly by while other people did the deed. Also, she used her charisma to make sure that she wouldn’t have to bloody her own hands. Patricia Hernandez called her “the Kilgrave of the Commonwealth” as a result of her dubiously moral tactics, and I can’t help but agree. This is a “no-kill run” according to the loosest possible definition of the term, but it’s definitely not a feel-good path.

Still, Hinckley’s efforts seem to have had a game-breaking effect on the Fallout 4 universe, resulting in everything from occasional audio weirdness to mysteriously spawning enemies. Also, refusing to directly kill anyone in the game — which includes disallowing companion characters to kill anyone, since their dirty work counts towards the protagonist’s kill count — takes a lot of time, due to the bizarre work-arounds required to complete most quests. For example, when Hinckley needed to kill the hero’s arch-nemesis, he did so by luring the enemy into mines over and over, then brainwashing AI characters into finishing him off. This may not sound too hard, but in practice, it took Hinckley five hours to complete what should have been a fairly straightforward boss fight.

I’d love to ask [the developers] why pacifism is so difficult in this Fallout … I’m a little disappointed in the lack of diplomatic solutions in this game, it’s a lonely departure from the rest of the Fallout series. My version of pacifism isn’t really diplomatic, it’s more exploitative of the game mechanics to achieve a zero-kill record. In other [Fallout] games, you had a lot of alternatives for bypassing the combat, whether it was with sneaking, speech checks, or a back door opened with lock-picking and hacking. In fact, in previous games (at least 3 and NV), your companion kills didn’t count towards your record either.

I may not be as determined as Hinckley to find ways around this problem, but I’ve done similar things in games on a much smaller scale. For example, I beat all of the first Tomb Raider reboot without killing any of the in-game animals (besides humans) — although some animals can’t be avoided, due to appearing in cutscenes and what-have-you. This choice definitely made the game harder for me, since those animals drop a lot of goodies that would’ve helped me level up faster. Trying to complete the game without killing any humans would’ve been far less do-able, though — there are more stealth options in the sequel, but it’s still not possible to perform a no-kill run in that game, as far as I know.

Games like Fallout 4 and the new Tomb Raider series don’t even expect the player to try to win the game without killing anyone. That’s not a path that’s available — and it would cost a lot of resources to include a path like that in a game. It sounds from Hinckley’s observations like Fallout 4 has made it even harder to pull off a no-kill run than in previous games. It’s easier to go in the other direction, because we already have a lot of polished precedents for games about clearing an area full of enemies; game designers and developers know how to hone that type of game to a high sheen. But the result is that we don’t seem to have many precedents for games that do the opposite and allow the player to use their powers of persuasion to get out of situations.

I think it’s a lot to ask designers to include “no-kill” paths in their games, from a financial perspective — but it is too bad that Fallout 4 seems to have gone so far in the other direction, given their history with including more creative in-game paths in prior Fallout games. Even if it isn’t possible to have a “no-kill” run in a game, I think it’s cool when games include some pacifist options, or at least, more creative alternatives to the expected clear-the-room-and-leave trope. Even if there isn’t an explicit narrative pathway for it, I like it when narrative designers leave some wiggle room for the player to make their own decision about who lives and who dies … as opposed to just requiring everyone to die.

Have you ever found a way to play a game like a pacifist? Go on, fill up the comments section with Undertale references — I’m sure that’s the game on everyone’s mind right now.

(via Kotaku, image via Fallout Wiki)