Brazilian Batman Battles Baddies For The Boys In Blue (For Real) 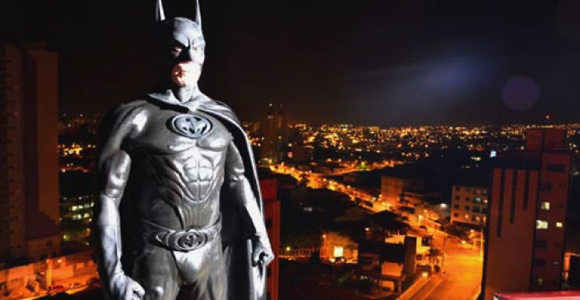 I’ve often remarked on how surprised I am that no one has actually taken up the mantle of Batman yet to fight crime in our world. Sure, we’ve seen real-life heroes acting like Batman (but in plain clothes) and people walking around pretending to be Batman (in costume) but no one has actually been the Dark Knight. That is, until now. This is the true story of a Brazilian man who’s been asked by local police to help them fight crime, as Batman.

André Luiz Pinheiro, is a retired soldier and at 50-years-old, Brazil’s military police are asking for his help. Ovale.com has the story of how both residents and business owners in Taubaté have approved of the initiative to have Pinheiro, who’s fond of dressing like Batman for children’s parties and other events, participate in peace efforts in the area.

Translated from the article: “The goal is that it is part of the Movement for Peace, held by various civil society organizations organized and had its first edition last Sunday. The Military Police want the ‘Batman Taubaté’ begin their work already on the 17th, when a step is carried out more work to combat crime in the neighborhood Esplanade St. Therese, one of the most violent city. The action will be part of the efforts of UAPC (Advanced Community Policing Unit) installed in the neighborhood last year by the PM for the purpose of assisting the integration between the police and the community.”

The details aren’t finalized but the Brazilian Batman won’t be dealing with things like shoplifters and purse thiefs, he’ll be helping fight the serious issues of murder and drug trafficking. “I am eager to know how we can work together,” said Pinheiro. “One child that I can help bringing the story of a character, it would be very cool.”

Residents the website spoke with seemed extremely positive about the idea. Could you use a Batman in your area?