Suddenly: The First Rendered Image of the Heroine of Pixar’s Brave 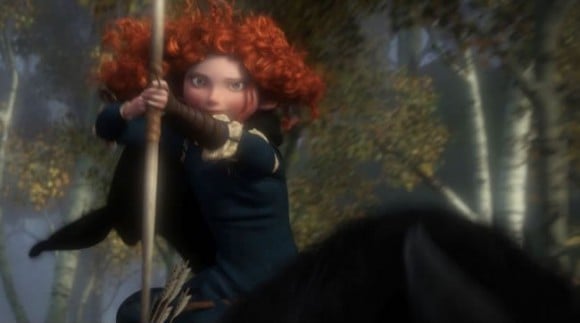 Ladies and gentlemen, meet Mérida, the Scottish princess heroine of Pixar’s first film with a female protagonist. Well, again, anyway, we saw a less computer polished version of her (in basically the same position), two months ago. A couple of pictures of her made it onto the internet last night, possibly with Disneypixar.fr as their source. However, that official site has since taken down their post, so there seems to be some evidence that we are seeing these before they were really intended to be shown.

The second picture below the jump is a wider angle shot of the above.

According to our research, Brave is set in a folkloriffic version of ancient Scotland, and Mérida is a headstrong archer who one day disobeys custom by killing a sacred bear. In order to fix the problems that ensue, she then “seeks out an eccentric old Wise Woman and is granted an ill-fated wish.” Also her dad is voiced by Billy Connolly and one of a trio of comedic relief Scottish lords is being played by Craig Ferguson. There is, as yet, no listed love interest character for her, although we can’t bring ourselves to expect Pixar to shatter the mold that badly, so one will probably turn up eventually.

Mérida herself will be voiced by Scottish actress Kelly Macdonald, who received several awards for her performance in No Country For Old Men but can also be seen this summer in the role of Helena Ravenclaw in Harry Potter and the Deathly Hallows: Part II.

Brave would also have been the first Pixar movie to be directed by a woman from start to finish, but Brenda Chapman was demoted last October to co-director, and Mark Andrews now takes the director’s credit.