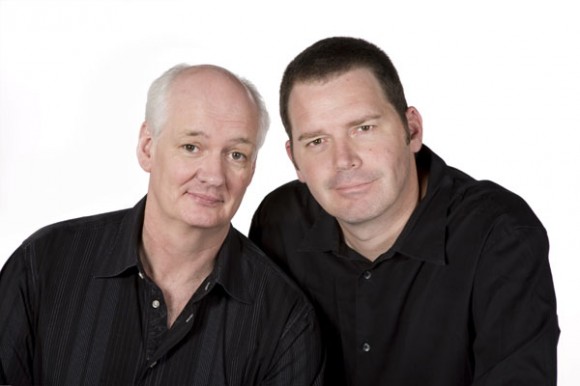 Someone asking badly worded question on Reddit is not news. But if the person being asked the question is Brad Sherwood and his response to the question is level-headed and classy, we will cover that. Especially if it concerns women in comedy. Because when someone poses the question: “Why are women so bad at improv?” and Brad Sherwood — pictured above on the right with frequent improv partner Colin Mochrie — can be more civilized than I could ever manage to be (and recognize the easily missed specificity of the question asked) that response merits a little coverage. I, in the meantime, will just silently rage that this is still even an issue that is being discussed.

In the interest of full disclosure, I am very familiar with the sketch and improv scene here in NYC. I haven’t been involved in it in a while, but I have done both sketch — which is written and rehearsed — and improv — which is about 92% off the top of the head and unrehearsed. (Sometimes people have characters developed ahead of time.) So yes indeed, this is extremely close to my heart.

That said, seriously? People are still asking why women aren’t funny? Not even “Are women funny?” — “Why aren’t women funny?” Is this supposed to be some ironic, contrarian point of view to which people are expected to be suddenly enlightened? Or just ignorance? Or just chauvinism? Here is the first part of the question, asked by user Cptn_Janeway to Brad Sherwood of the improv show Whose Line Is It Anyway?:

“This question has been bugging me for a while now and I just had to ask you. Why are women so bad at improv? Search your feelings, you know it to be true. Ive [sic] been rewatching all of WLIIA and the women are usually really bad (save: kathy greenwood sometimes.)”

So, giving Cptn_Janeway the benefit of the doubt, let’s assume that the only improv he’s ever seen is on WLIIA. First of all, I recognize the talents of the performers on the show. They’re awesome. They crack me up. But oftentimes on that show, what we see on TV is the result of something that came after the initial improvisation. Several accounts of people who saw tapings of the show describe the performers improvising a scene, then finding the game, and then doing the scene from that. And that’s what ends up on TV. That’s how improv works, but that’s also how it turns into a loosely rehearsed sketch. So while they’re improvising on WLIIA, what we see on TV might actually be a sketch that came about as a result of improv.

That all said, Cptn_Janeway might not know the first thing about improv. So we’ll forgive him for that.

Unless Cptn_Janeway was only referring to the women who perform on WLIIA. And after reading through the comment thread — which took on the completely predictable tones of both outrage at his wording and “was good until it got invaded by feminists” — Cptn_Janeway acknowledged that he was referring only to women on WLIIA, and that yeah, his question sounded totally sexist.

Okay, good. But still, are the women on WLIAA “so bad at improv,” or is there more to this? Let’s dissect Sherwood’s response:

Wait, what? Okay, Brad Sherwood is a comedian. I choose to believe he’s being sarcastic. Or extremely diplomatic.

Improv women have a huge hurdle to overcome when performing.

Please don’t tell me that hurdle is a penis.

They are playing with men, who bulldoze over them.

Oh. Well, that would be true of any established improv troupe, such as the one that regularly appeared on WLIIA.

Watch how many times a woman is trying to say something in a scene and gets over-talked by a guy. It is tough for a woman to break through the male energy on the show. It’s kind of like playing mental football with big, loud, impolite, excited “man-boys”. The guys are just louder, and all rushing to get their ideas heard. So, a lot of great “woman-ideas” in a scene just get missed and the woman comes across as not adding something. That is why so many successful female comedy performers and stand-ups in history have loud/brash (almost male) personalities.

As Sherwood explains, the issue is not that the women who performed on WLIIA were not funny — they were just never regular members of the troupe. Improvisers who perform with each other develop a rhythm and learn how to read each other’s minds and beats, and when a newcomer — regardless of gender — enters the mix, it’s just hard to keep up.

Improv is hard, and when you’re trying to improvise with people who have been improvising together for years, it’s even harder. For anyone. Period.

It’s easily comparable to unsuccessful hosts on Saturday Night Live. Some of those hosts happen to be women, but a lot of them are also men. They just can’t keep up with sketch comedians because they don’t perform sketch comedy, and if they do, it probably wasn’t with the cast and crew of SNL. Take Jane Lynch, an accomplished comedic actress. She comes from the heavily improvised Christopher Guest movies and most recently, is on a scripted dramedy. (Called Glee. You might have heard of it.) But in the sketch comedy format, her performance felt awkward. Some sketches were good, but the show as a whole fell a bit flat. But it was most likely the fault of the writers not knowing how to write for this kind of comedic performer, at least not in the small amount of time they had. But does that make Jane Lynch bad at comedy because she was unsuccessful on one comedy show? No way! No way in the world. Same goes for the female improvisers on WLIIA.

And again, it has nothing to do with gender. John Hamm was an awesome host. So was Anne Hathaway. But January Jones sucked. So did Robert DeNiro. And so did every single male athlete who has ever been on SNL ever. (Except for Peyton Manning. He was hilarious.)

So, can we stop talking about how women aren’t funny now? Because it’s getting old.