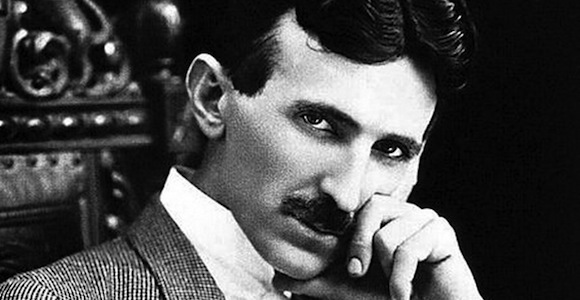 Look, this will all make sense in a moment.

Brad Bird, see, the guy behind The Incredibles, The Iron Giant, Ratatouille, and Mission: Impossible – Ghost Protocol, is working on this unnamed science fiction film, according to Hollywood buzz. Written by, yes, Damon Lindelof, it’s currently running with the code name 1952, understood to be a codename that may or may not have anything to do with the actual content of them movie.

The movie was also briefly known as Tesla, which, again, may or may not actually be related to the subject of the movie. Who is currently related to the movie? George Clooney.

The plot is being kept under wraps, though it has been described as being in the vein ofClose Encounters of the Third Kind, Steven Spielberg’s 1978 movie about a man searching for extra-terrestrials on Earth.

Bleeding Cool notes that Nikola Tesla believed that some of the signals he intercepted during his career came from alien life on Mars, and hypothesizes that Clooney may be playing Tesla in a Brad Bird movie written by Damon Lindelof for Disney.

And now, I’m not saying that I don’t want that to be true. Because I do. And so does Nikola Tesla up there. Just look at those eyes. “I dare you,” he says, “Give me an onscreen legacy that includes performances by George Clooney and David Bowie.”

I’m just saying there’s a lot of conjecture here. It does seem odd that the title would be changed to Tesla and then changed back, so maybe there could be something there… I just won’t think about it too hard so that no reasons present themselves and wait for the steampunk alien invasion movie of my dreams.