Hey, Bostonians! Want To Attend an Advanced Screening of the Pilot For HBO’s Westworld? 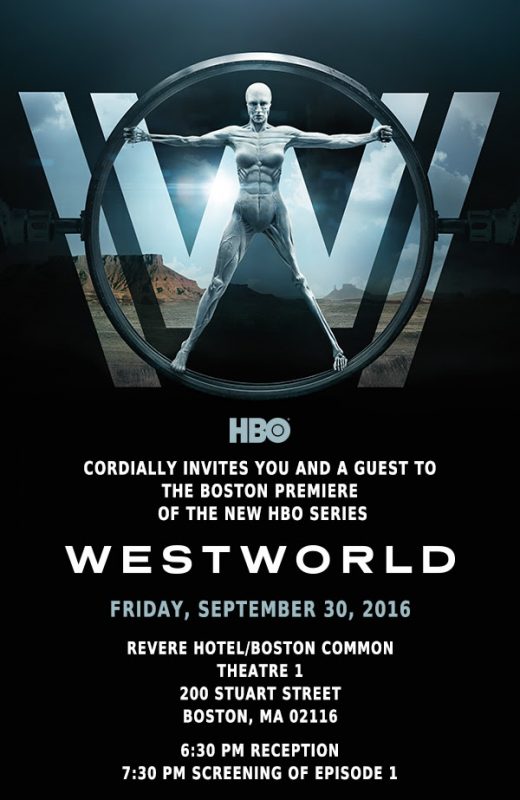 HBO’s upcoming robot-centric drama Westworld premieres this Sunday night, but there’s also a special advanced screening taking place tomorrow night in Boston, MA. Initially, the screening was only open to press folks like myself (and yes, you can bet that as the resident robot super-fan here at The Mary Sue, I’ll be there), but the organizers for the event let me know today that there are actually a few more seats left in the screening room. They’ve asked me to cordially invite our Boston-based readers to come along, and so I shall.

If you happen to live in Boston, like me, and you also happen to want to see the pilot episode of a sci-fi TV show starring Anthony Hopkins, Evan Rachel Wood, and James Marsden, and you also don’t have any plans tomorrow night, then you are in luck. The event will take place at the Revere Hotel near Boston Common; there’s a pre-screening reception at 6:30 PM, and the actual screening starts at 7:30 PM. RSVP to the event by filling out this form! If the live-tweeting urge strikes you, feel free to hit up @WestworldHBO and use the #WestworldBOS hashtag.

Of course, we don’t yet know whether or not this pilot episode will be any good. We do know that the pilot will feature a depiction of sexual assault, so be wary of that if you think it may deter you. That said, co-writers, co-showrunners, and co-producers (and married couple) Jonathan Nolan and Lisa Joy have addressed those concerns, with Lisa Joy having clarified that the show has “endeavored for [Westworld] to not be about the fetishization of those acts.” We’ll just have to wait and see whether that ends up being the case, eh?

Whether you can attend this pre-screening or not, I’ll definitely be writing it up here at The Mary Sue afterwards, so look forward to that appearing on the site as soon as humanly (robotically?) possible. Because I am a fan of all things robo-tastic, that means I have notoriously high standards for the genre, so trust me: I’ll pull no punches!