BOOM! Studios, the folks who have been bringing back all the classic Disney comics and cartoons (Darkwing Duck, Ducktales, Chip ‘n Dale Rescue Rangers), and who have managed to get the licenses to make Muppet comics as well; have been teasing Peanuts related materials on the website for their new BOOM! KIDS imprint.  This would imply that they are going to be publishing material featuring the characters of Charles Shultz.  (Unfortunately all traces of Peanuts imagery has since been removed.)

Which is all well and fine, until you take into account that a separate company, Fantagraphics, holds the rights to the publication of all of the original Peanuts strips.

BOOM! teased the concept with this picture: 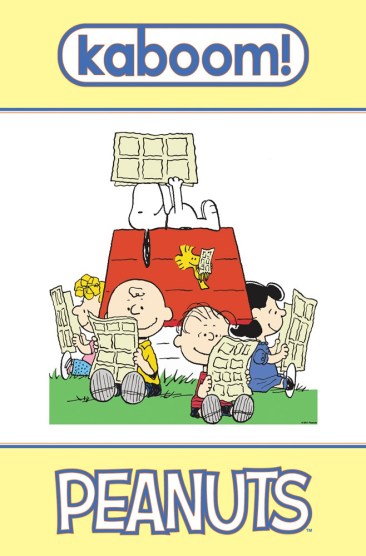 This would seem to imply that BOOM! plans to create new Peanuts content.  Comics Alliance says they have reached out to Fantagraphics and the company confirms that it still holds its rights to the original Peanuts.  Far be it for us to warn BOOM! of the potential perils of creating the first and only Peanuts content completely without input from the strip’s creator (who died eleven years ago this month).

Wait, no.  Yeah.  We’ll totally warn against it.  Seriously. Don’t do this.