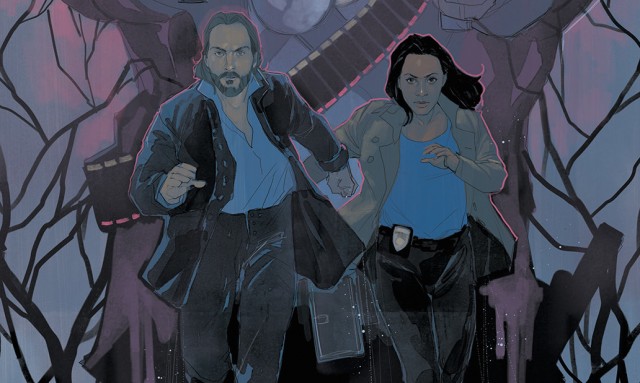 If you’ve only started reading this site since Sleepy Hollow went on hiatus back in January, I’m not quite sure that you know what you’re in for when the show skips back into our lives tonight with its season two premiere. TL;DR—Rebecca (and maybe Sam, if I can strongarm her) continuing to freak out about her favorite new show of the 2013-14 TV season. If Sleepy Hollow-the-show isn’t enough for you, may we suggest you pick up BOOM! Studios’ four-issue Sleepy Hollow mini-series, debuting on October 15th. It’s written by Marguerite Bennett, with art by Jorge Coelho and back-up stories written and illustrated by Lumberjanes’ Noelle Stevenson. You wanna go pre-order? I’ll be here when you get back.

…OK, we all good? We had the chance to interview Bennett about Sleepy Hollow and her upcoming female-led spy comic Butterfly, debuting with BOOM! on September 24th. It’s not going to have any undead George Washington (really, too few comics do), but I will still begrudgingly admit that it looks really flipping amazing, I guess. While we had her, we couldn’t not ask about two other projects she’s working on: Marvel Comics’ Angela: Asgard’s Assassin, based on the Spawn character originally created by Neil Gaiman, and DC Comics’ new run of Earth 2. Scroll down below the interview and you’ll also find cover art and a sampling of interior pages for Sleepy Hollow and Butterfly.

Rebecca Pahle (TMS): The Sleepy Hollow fandom seems to have exploded out of nowhere—the pilot aired, and suddenly everybody (myself included) was losing their minds over it. And there’s been a lot of excitement over this comic, too. What is it about Sleepy Hollow that you think created this level of excitement? I know you’re a huge fan yourself–what is it that drew you to the show?

Marguerite Bennett (MB): The show is charming. Amid all the darkness and blood and camp, the bond between Abbie and Ichabod is so strong, trusting, and lively—they’re such a delight to follow. Between the work of the writers and the performances of the cast, you root for the characters completely, just as you root for their supporting cast, for Jenny, for Frank, for Macey, even for Andy in his redemption. And you can laugh if you want, when talking about a show that features demons, golems, conspiracies, George Washington, and the apocalypse, but Sleepy Hollow’s address of our own ugly history and hypocrisy is so important to me. From Ichabod’s era, when our nation was created under ideals of freedom and equality while simultaneously treating human beings as absolute chattel, to our present era, where we live in the safety of certain rights and liberties, yet still grapple with virulent racism, sexism, homophobia, the mistreatment of the mentally ill, and the erasure of indigenous peoples—Sleepy Hollow doesn’t shy away from our misdeeds, but encourages bravery and compassion the likes of which Abbie and Ichabod display.

TMS: One of the things that delights me about Sleepy Hollow is its frequent constant historical cameos/name checks. Can you say whether we’re getting anything like that? Flashbacks/Ichabod dishing on a Founding Father/undead George Washington?

MB: We do have some sly jokes, but I’m afraid I can’t say who without spoiling!

TMS: Is there anything you wanted to do in the Sleepy Hollow comic that Fox put the kibosh on? More Ichabod Crane in skinny jeans?

MB: The Sleepy Hollow writers have been wonderfully supportive on the book. Every note they’ve given has only made the story stronger, and they’ve given us a ton of freedom, from the inclusion of queer characters to some truly fangirl moments that I can’t wait for Tumblr to get hold of.

TMS: Tell us a little bit about the spy at the center of Butterfly. What sort of superheroine is she? What drew you to her character?

MB: I’m afraid Butterfly isn’t a superheroic story, but a psychological study in spycraft, trust, and trauma—it’s a battle of cunning between two spies, one from the post-9/11 world of the War on Terror and one from the brutal era of the Cold War. I don’t reckon I’d call Butterfly a superheroine by any stretch, though Lord knows part of what drew me to her is that she might have the capacity for supervillainy, if she were so inclined. Rebecca Faulkner—Butterfly—is more of an actress than a secret agent. Her job is to vanish into the crowd, to play a part so long that she all but forgets who she is. She is flawless in her own invisibility, vanishing into the roles written for her, a mask without a face behind it. When she loses the purpose that sustained her, she is utterly cut off, forced to reassert her own true identity, to rip through the roots of the past she buried long ago. Who wouldn’t like to go digging in a mind like that?

TMS: I’ve read that Butterfly’s more a psychological thriller than an action story, whereas another project you’re working on—Angela: Asgard’s Assassin—is, I’d imagine, quite action-based. Do you prefer more action-heavy plots over more character-centric stories? Or is it all about finding a middle ground?

MB: I prefer character-centric stories, which can make me a poor fit for certain stories that require a defter sense of action and chase. I make it a principle to defer to my artist on all sense of excitement during fights and destruction, not because I am disinterested or indifferent, but because they know visuals, have studied them and made a craft of them in ways that I, as only a writer, could never even imagine. Whenever possible, I try to pair with talented artists I trust and then get the ever-loving hell out of their way.

However, to your original question, I think some stories can be pure emotion—just a conversation, even—and others can be pages of unadulterated action. Form must fit function, that’s all. There was an issue of Secret Avengers by Nick Spencer, with art by Luke Ross, that was literally a conversation about the nature of death in the Marvel universe, and it’s stuck with me for years. There was also an issue of Joe Hill’s Locke & Key, illustrated by Gabriel Rodriguez, that was splash after splash of battle, and it was absolutely brilliant.

In general, my ideal comic as both a reader and a writer is harmony between the action and emotion, and I would never imagine them to be mutually exclusive, but I would also never ever presume to say it is impossible to execute a book that dives unrepentantly all the down into only one concept. There are rules of writing until you break one and it works anyway. If you can pull it off, and make it meaningful, that’s all that matters.

TMS: What’s been your favorite part about working on Angela?

MB: Angela is such a wildcard of a project, but even with all the crazy, violent, witty fun of it, my answer is absolutely the people I get to work with. Kieron [Gillen], Phil [Jimenez], Stephanie [Hans], and Wil [Moss] are an incredible team. Stephanie’s covers give me chills, and Phil draws the deadliest cuties in the galaxy. My admiration and affection for them is such that it even distracts from the fact that I’m writing a Neil Gaiman character (and when I remember my heart rate goes all crazy wonky and I have to lie down).

TMS: Can you tell us who the focus will be for the new arc of Earth 2?

MB: The wonderful Tom Taylor and I will be jumping all around the ‘verse—we’ll see the heroes, we’ll see the villains, we’ll see the familiar civilians caught in the crossfire. Each book of the monthly is going to focus more specifically on one group, one family, one team per issue. One of my first goals is to make every issue of the monthly absolutely accessible to fans who aren’t reading the weekly, or, hell, haven’t even read Earth 2 before. The weekly is overflowing with battle, drama, and intensity, and the monthly serves as its counterpoint, letting us get into deep, raw moments while still delivering fully on the high action and adventure. Andy Smith is joining us as our lead illustrator, and his pencils are just killer.

TMS: The Mills Sisters join forces with Butterfly. How quickly would the Apocalypse be averted?

MB: Butterfly presents herself to Moloch as his natural ally, so subtle and manipulative that she quickly becomes his most trusted advisor; her willingness to shed blood, even innocent blood, removes all doubt from his mind of her loyalties. The Mills sisters know this is meant as an act on Butterfly’s part, but as Butterfly falls deeper and deeper into the mask, they believe Butterfly has been compromised. Between Jenny’s brilliance, Abbie’s bravery, and Butterfly’s cunning, they learn Moloch’s weakness and gain access to his sanctuary, but after a hex activates and traps them all, a violent standoff ensues. Jenny and Abbie are thrown into a battle of wits and wills not only against Moloch, but against their own deadliest ally. A choose your own adventure book! Out this fall. ;)