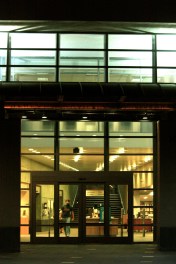 The fact that libraries across America are facing real challenges to their very existence is nothing new. In this hard economies, many communities are asking if a place to rent books is really a worthwhile investment and are, sadly, shutting libraries down. But rather than loose a resource, Newport Beach, California is considering a radical option that would keep the library space but eliminate books from the building.

The plan is being spearheaded by City Manager Dave Kiff, who sees it as a modern re-imagining of a library. Instead of having books in the labyrinthine stacks we are all so used to seeing, the town’s central library would have an electronic system to loan out physical books. A patron would request a book at an electronic kiosk, and then pick up the book from specific lockers. The rest of the space would be turned over to a 2,200 square-foot reading area with a central fireplace.

The decision is unusual since it acknowledges the community’s commitment not only to having books available, but to ensuring that some of these books be physical in nature. Other libraries have sought to modernize by providing eBook loan programs, despite the difficulties involved. But after a careful survey of Newport’s four library branches, the city determined that few people were browsing or checking out books. Most, came in to use computers or work on laptops. The new space would preserve the library’s collection, while creating space for how most patrons use the library.

Maintaining the library’s physical collection is a bit of a refutation of the growing eBook movement. From The LA Times:

“A lot of people still want to touch a book, hold a book, smell it,” said Cynthia Cowell, library services director for the Newport Beach Public Library. “The sensory experience is still very important to many of us.”

Newport’s plan also demonstrates a fundamental shift in the library viewed not as simply a book depository, but as part of a multi-purpose community center. Other libraries have gone this route, opening their space for studying, events, and meetings in an effort to remain relevant.

Newport Beach is fortunate to have the resources for such an ambitious scheme, as many communities simply cannot afford to follow in their footsteps. But there is a possibility that demonstrating the viability of such a plan, and investing in civic resources, can enrich local communities. Not every town will get a book delivery system and a massive room with a fireplace, but they may be able to find new ways to continue offering vital services to their denizens.

(via LA Times, image via mind on fire)