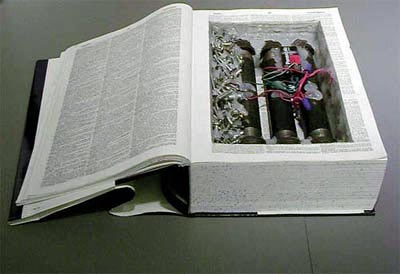 Let’s pretend we live in a world where digital objects are forced to reflect the utility of a real-world analogue. For instance, we could say that this blog is a lot like a newspaper, and require that it be sold at news stands, get ink on your fingers, would require the destruction of an entire forest, and only be durable to last a few days. “This world is ludicrous!” I hear you cry. But this is the world in which book publisher HarperCollins wants us to live.

The Pioneer Library System of Oklahoma has posted an open letter to their blog in which they reveal that the eBooks that HarperCollins makes available to the library for its (groundbreaking, and totally amazing sounding) digital loan program will self-destruct after 26 checkouts.

If the library wishes to continue to offer the expired eBooks, the library will have to re-purchase them. This limitation does not include allowances for books that are renewed, and the libraries cannot remove the books from the digital collection; they’re just made unavailable for checkout.

Librarians are understandably quite upset about the new policy. Not only because it hamstrings their efforts to provide books to the public, but because they find the premise to be completely flawed. In the following video, librarians show how many checkouts popular HarperCollins books have had, and show the good condition that the books are still in. Ironically, one of the physical books features a life-time guarantee.

As stated in the video, the library has determined that the extra costs imposed on them by the publisher. From the Pioneer Library website:

Despite statements to the New York Times that HarperCollins hopes this move will, “ensure a presence in public libraries and the communities they serve for years to come,” it may, in fact, do just the opposite. Many of our collection development policies require us to look at longevity to insure we are being good stewards of the public monies. HarperCollins has now ensured that their eBooks are forced in to obsolescence and off our virtual shelves and away from consumers with the means to purchase these titles in print or electronically for themselves.

The letter goes on to point out that wear and tear, not number of checkouts, is the metric by which librarians determine if a book needs to be repurchased. They also claim that due to changing tastes and technological advancement, many of their digital offerings do naturally decay and require re-purchase, but on a scale far more manageable for the library.

The root of this is likely in the risk-averse mindset of the modern publisher. For most books, the profit margin is extremely tight, making publishers wary of giving too much away with the move to digital books. No doubt they look to the music publisher’s struggle with piracy and fear that they would be unable to survive a similar fight. Their decision to force libraries to repurchase materials that only exist in cyberspace is a rather odious solution, especially when any number of approaches could be taken to encourage frequent repurchasing. Perhaps making new, improved digital editions periodically available — similar to how Apple launches a new product with a new slew of features every year or so.

HarperCollins has taken a rather lazy road with this decision, similar to that made by the RIAA to focus on punitive measures for their users, rather than attempting to innovate and move with the market. With nearly 100 years in the publishing business, seeing the rise and fall of literary giants and changing reading habits, one would expect better of HarperCollins than punishing libraries whose only goal is to encourage reading.

Now please ball up this blog post, and place it in a recycling bin.