Comics Using Their Powers for Good: Bluewater’s Plans For Education 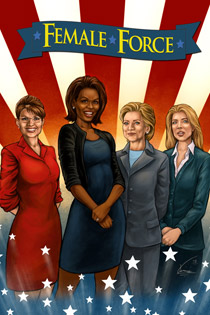 Show of hands: how many of you read (or even wrote) comics during class as a kid because social studies was putting you to sleep? What if you actually got to read comics in class, for class? Comics publisher Bluewater Productions has plans to incorporate education into their offerings with the goal of helping students who don’t have the easiest time reading. Well-known for its titles FAME and INFAMOUS, depicting stories behind, well, the famous and infamous, Bluewater seeks to expand such offerings into educational plans (free of charge) that will turn previously dry stories about history, current events, and public figures into graphic novels and comics that will appeal to kids. Will some flashy art and good storytelling keep kids’ attention? It might be a start, but that’s only part of the interactive program.

Bluewater President Darren Davis credits comics for helping him learn various skills that had previously eluded him in school:

“I was one of those students in danger of falling through the cracks… I was a borderline student and a poor reader. But once I discovered comic books, I couldn’t put them down. My vocabulary increased; my comprehension improved. I can honestly say that comic books gave me the confidence I needed to eventually tackle Shakespeare and Steinbeck.”

Now, he hopes to bring the same benefits of comics to kids now, except his plan is to put actual educational material into the comics. Kind of like sneaking vegetables into brownies. Except way more conspicuous. If written — and drawn — well enough to be both entertaining and informative, this just might be a really fun tool that will make kids interested in learning about very important people. Indeed — this seems like an awesome way to create an army of history nerds.

In addition to the comics, such as Female Force (pictured above), the lesson plans include educational exercises inspired by the famous subjects of their comics. These are available on the web site and are offered at no cost. (The graphic novels are sold at a discount to libraries and educators.) For example, here is one lesson featuring First Lady Michelle Obama:

Right now, there are only a handful of these lesson plans, which also feature exercises inspired by teen-friendly celebrities like Taylor Swift and OMG Justin Bieber. No, really: You probably never thought you’d see the phrase “Bieber Lesson Plan” in your lifetime, but it’s about objective writing, journalism, and things like staying grounded. So it’s pandering, but for a good cause!

This is a fun idea. It’s been a looooooong time since I’ve been in school, but if my teachers had incorporated something creative and artistic into our lesson plans, I probably would have a) thought my teachers were trying to pull a fast one on me, b) secretly loved it, and c) became just curious enough to buy it.