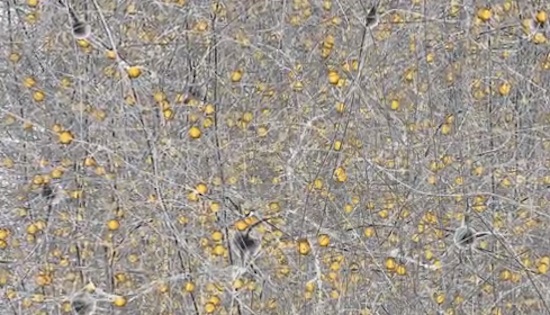 Brain-imaging techniques like MRI are good for getting big pictures of the brain, tracking large general areas that activate in response to stimulus, but trying to parse that data into useful forms can be a trying task. That’s why over the last couple years, neuroscience research has begun moving in another direction, looking for a map of connections between synapses — the connectome. Unfortunately, with billions upon billions of connections in every brain, mapping the connections between synapses has proven much easier said than done. However, researchers working on the Blue Brain Project — an attempt to build a working computer model of a brain at the Swiss research institute École Polytechnique Fédérale de Lausanne — have reported a major step toward a working connectome.

They’ve used their model to accurately predict where synapses will connect in a neocortex, offering what could prove to be a roadmap for future work on deciphering the connectome.

By constructing a virtual neural microcircuit and comparing it to a tissue sample, researchers were able to take what they have learned in the project’s first seven years and confirm that they’ve developed some real insight into how neurons develop, grow, and connect to one another. One important if potentially jarring lesson: Neurons grow in a largely pell mell fashion, connecting with whatever other brain cells are convenient, and seemingly making for a lot of random connections. The implication, that every brains is assembled largely by chance, while not necessarily flattering, would actually explain a lot about how our brains seem to work in everyday life.

Researchers assembled their model of a piece of neocortex, the part of the brain thought to govern spatial sense, cognition, and reasoning. New data on how to model the brain is a major find for the Blue Brain project, whose stated goal is to recreate an entire brain in a computer model. The research also suggests that synaptic connection models in the same species are more the same than they are different, a big victory for connectome supporters in general and one that suggests data from a general connectome — once we have one up and running — will be applicable to a wide variety of patients. For more details, you can check out the video below.