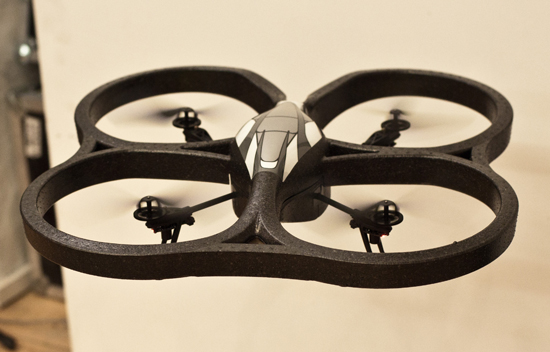 Surely, there are folks out there that have long wished to fly a helicopter purely through the power of their mind. Thanks to researchers at Zhejiang University in Hangzhou, China, we as a people are one step closer to making this dream a reality. They have developed a thought-controlled quadrotor that interprets brain activity as commands in order to fly around. The commands available are only limited by what kind of brain activity scientists can pick up, and the movements that the quadrotor can make.

The entire project was built by the researchers in an effort to provide those with impaired motor abilities a new method with which to interact with the world around them. Given the versatility and maneuverability of the quadrotor, it can explores places that handicapped users couldn’t possibly reach. That’s the idea, anyway.

As it stands, the quadrotor uses brain activity picked up by the Emotiv, an EEG headset that’s on the market, in a myriad of ways. Thinking “left hard” causes the device to lift off the ground, clenched teeth has it descend, thinking “push” flies it upwards, “right” goes forward, “left” has it turn clockwise, and blinking four times causes the quadrotor to take a picture.

There is still a computer part in the process, as the Emotiv sends commands to a computer by Bluetooth which then relays via wireless to the quadrotor. Eventually, a headset could be created that does all of these things on its own. For now, the current system is set to be shown in September at he Ubiquitous Computing Conference in Pittsburgh, Pennsylvania.