These Film Execs Were Not Pleased With Early Screenings of Blade Runner. Not One Bit.

Sometimes, a thing pops up on Reddit that we just have to share with you. This morning, that thing is this memo from an early screening of Blade Runner shown to film executives at Tandem Productions. Now, Blade Runner is one of my favorite movies of all time, ever, and yes, I even love the voice over. As a fan, though, I know the movie can be…rather divisive. For every one of us that loves Ridley Scott’s classic take on Do Androids Dream Of Electric Sheep?, there’s another person who despises it, or at least feels like they would despise it if they could stay awake through the whole thing. The execs present for this screening are in the latter camp, and boy are they not shy about it.

The behind-the-scenes battles that went into filming Blade Runner are the stuff of legend, and have resulted in quite a few new versions and Director’s Cuts being released over the years. It’s so nice to get a glimpse at what some of that infighting actually looked like and where the bosses were seeing problems. From heartening observations like “This movie gets worse every screening” to more generally hostile commentary like “Voice over is an insult” it feels amazing that the film got released at all.

Beware as spoilers lay ahead, but seriously, if you haven’t watched Blade Runner by now, we feel safe in saying you’re probably not going to. And that’s okay. It’s, y’know, measurably wrong. But it’s still okay. 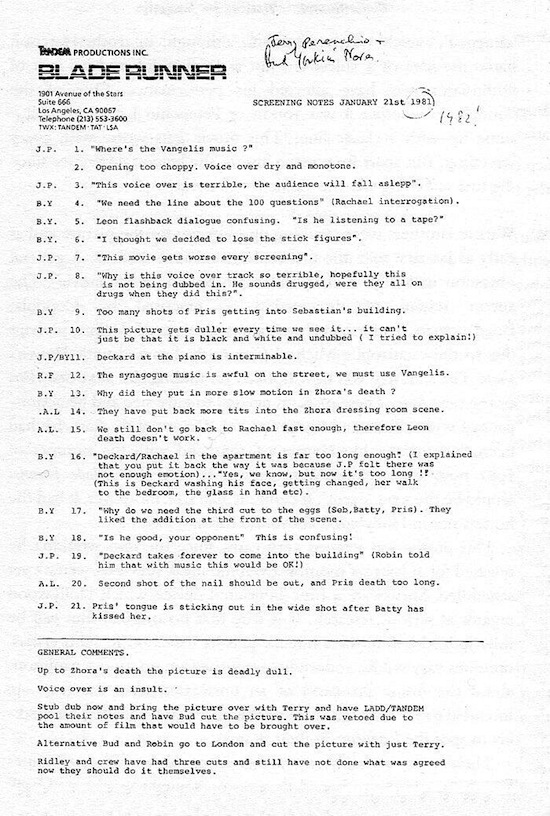