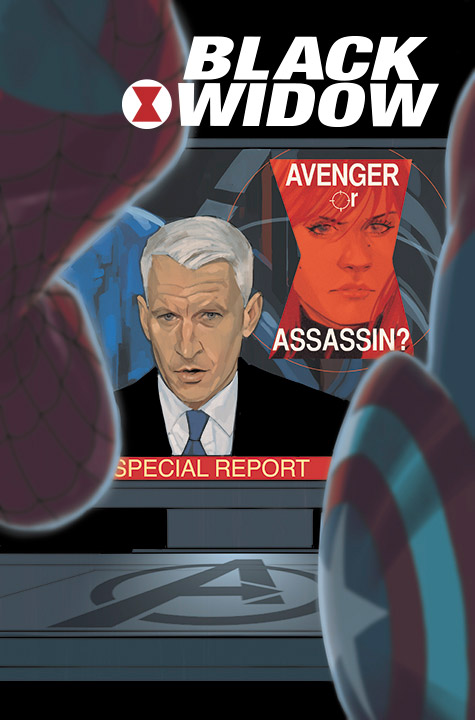 In all seriousness, this cover by Phil Noto is incredibly gorgeous. And it’s not just a one-image gimmick, either: according to the creative team behind Black Widow, Anderson Cooper will play an integral role to the plot as he “exposes the tangled web of the Widow’s past discretions.” Uhhhh, yes please?

“It’s Anderson doing what he does best: looking for the truth and reporting on events,” writer Nathan Edmondson told Marvel.com. “We imagine that in Black Widow’s world, as would be the case with many other Avengers, things she does can’t be ignored by the media and all it takes is somebody who knows how to ask the right questions to make her world very uncomfortable for her but in a way that is perhaps not unjust.”

Even better? Apparently Cooper is a comic book fan himself and “was thrilled with the idea” to be directly involved with Edmondson’s book. I knew I liked that guy for a reason. You know, other than his dashing looks and measured, authoritative presence.

Black Widow #12 is scheduled for a November 2014 release, and the ongoing title is consistently one of Marvel’s best. If you haven’t checked out any of the previous issues, this might be a good place to start.