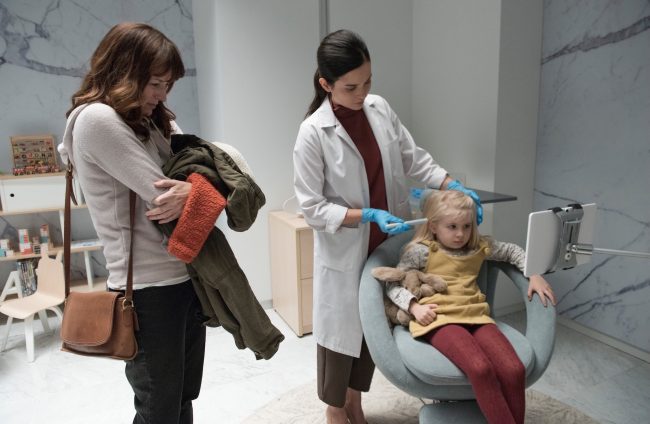 The internet is abuzz with a new season of the popular anthology series Black Mirror which hit Netflix last week. However, many are unhappy with a plot point in the episode “Arkangel” that viewers are saying portrays birth control in an irresponsible way.

Directed by Jodie Foster and written by Charlie Brooker, the episode centers around a mother and daughter named Marie and Sara played by Rosemarie DeWitt and Brenna Harding. Marie implants Sara with a chip called Arkangel that allows her track and monitor her daughter. At a frightening turn of the episode, Marie sees her daughter having sex and learns that Sara is pregnant with the Arkangel technology. In response, she goes to the pharmacy, buys “emergency contraception”, and sneaks it into her daughter’s morning smoothie. After unknowingly taking EC, Sara pukes at school and the nurse tells her the emergency contraception she took to terminate her pregnancy made her sick.

Viewers were quick to point out that the show appeared to mix up emergency contraception with the abortion pill, since emergency contraception like Plan B actually doesn’t terminate a pregnancy. Rather, the morning-after pill prevents pregnancy in the case of unprotected sex by stopping or delaying your ovary from releasing an egg, before an egg implants itself in the lining of the uterus. Since fertilization typically doesn’t happen right away, as sperm can live inside the body for days, EC is more effective the sooner you take it. It will not induce an abortion if you are already pregnant. Again, if you are already pregnant, it does not work.

In contrast, the abortion pill terminates a pregnancy with two medicines: one that blocks a hormone that continues your pregnancy and another that causes cramping and bleeding to empty the uterus. Currently, the abortion pill is highly regulated and must be dispensed by a doctor.

Now, it could be that this particular episode of Black Mirror takes place in a world where an abortion pill is available in pharmacies and they go by the name of EC. Sure. However, to simply present it like this without comment perpetuates many dangerous ideas. Why not just call it the abortion pill if that’s what it is? Considering most of our country is lacking is proper, candid sex education, it’s incredibly irresponsible to conflate the two. Our media, in general, is so heavily lacking in honest portrayals of abortion. When women are constantly fighting for the right to choose and rights over their own bodies, media should not be spreading misinformation or misguided portrayals of abortion when there’s plenty of propaganda already doing so. Sci-fi is not an excuse for this:

I watched the @blackmirror episode where a mother coercively terminates her daughter’s pregnancy with “EC” slipped into her smoothie. Maybe EC means something different in a dystopian future, but the emergency contraception we have now will NOT terminate an established pregnancy.

There are so many myths and misconceptions related to sexual and reproductive health, especially among young people. The entertainment industry has a responsibility to give viewers facts and not further spread untruths that could adversely affect their health.

For years, abortion has been misrepresented on television and in films, making it look more dangerous than it really is and inaccurately portraying the typical abortion patient. Even dystopian future should represent medical information with evidence-based fact, not fiction.

Check out the amazing research by my colleagues @gesisson and Katrina Kimport on Abortion Onscreen https://t.co/ZeivMZLyPE.