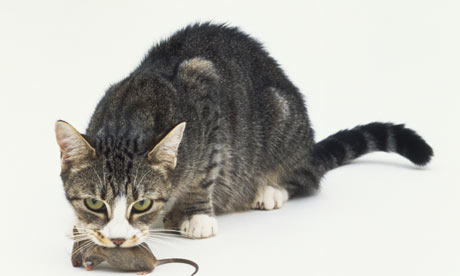 An unidentified man in Prineville, Oregon has been diagnosed with a blood-borne variation of the “Black Death.” And no, we haven’t been transported to 14th century Europe.

The man in question was bitten while trying to grab a dead mouse from a stray cat’s mouth. Soon after, he developed a fever and checked himself into a hospital, where it was confirmed that he was afflicted by the plague.

“It’s unclear whether the cat or mouse were infected with the plague, but the stray cat has since died, and is now sent to the Centers of Disease Control and Prevention for testing. Also, the dozen or more people that were in contact with the unidentified man are receiving preventive antibiotics,” according to Z6Mag. “It can develop into three forms: bubonic plague, which swells lymph nodes across the body; septicemic plague; and pneumonic plague, which affects the lungs. Symptoms of the plague include a swollen lymph gland known as a “bubo,” fever, chills, headache, and extreme exhaustion. The illness usually occurs two to six days after infection.”

According to ABC News, the plague isn’t entirely uncommon: “There is an average of seven human plague cases in the U.S. each year. A map maintained by the Centers for Disease Control and Prevention shows that most cases since the 1970s have been in the West, primarily the southwest.” While it hasn’t disappeared outright, it has become increasingly less of a death sentence for infected humans — before World War II the national mortality rate clocked in at 66 percent, whereas now, after the advent of antibiotics, only 16 percent of cases prove to be fatal. Although those statistics seem to bode well for the Prineville man, he remains in critical condition.

This unfortunate story does raise a question: why in the world did he try to grab a dead mouse out of a stray cat’s mouth? “In rural areas, part of the role of cats is to keep the rodent population controlled around our homes and barns,” said a Central Oregon health official. In other words, leave cats alone when they hunt, it’s their job to meddle with infectious rodents. Sadly, for this sick Prineville man, that wasn’t self-evident.