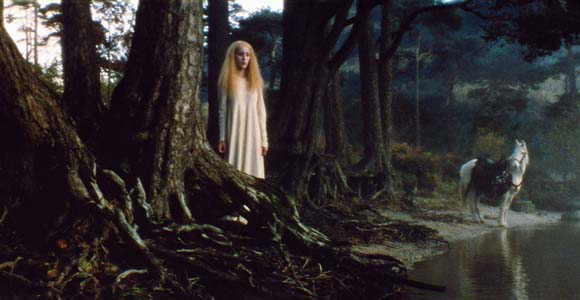 This is actually the first I’ve heard about the long-lost short film from Star Wars art director, and Academy Award winner Roger Christian called Black Angel. Which is odd, considering it’s totally my kind of thing. The sword-and-sorcery title was made with financial assistance from George Lucas and played before Empire Strikes Back in Europe and Australia. It’s been lost for years but like the plot of many fantasy film, the magic has been reawakened! Now, how does Christian plan to get it to the hungry masses?

Black Angel revolved around a knight of the Crusades who is transported to another realm and must save a princess. It was a directorial debut for Christian who was able to use his relationship with Lucas to get the film screened before Empire. It stared Patricia Christian and James Gibb.

“The short was never released on VHS or DVD, and Christian himself was unable to track down the original negative. The director believed it was lost—until he got a call from an archivist at Universal Studios last December,” writes Wired. “The movie’s gorgeous art design and cinematography influenced many Arthurian myth films that followed, fromExcalibur to Legend. Christian slowed and elongated the action scenes with a technique called step-printing, which Lucas then used for a lightsaber battle in Empire.”

Now that Black Angel is in his hands again, how will Christian distribute it?

“Probably the best way is a downloadable version,” he tells Wired. “I think it would be great to see it in a cinema again on a program with Empire Strikes Back. That’s how it was intended to be seen.”

Odds are pretty good on that last bit considering the original trilogy will be back in theaters (in 3D) soon. Did you see this film when it was originally released?