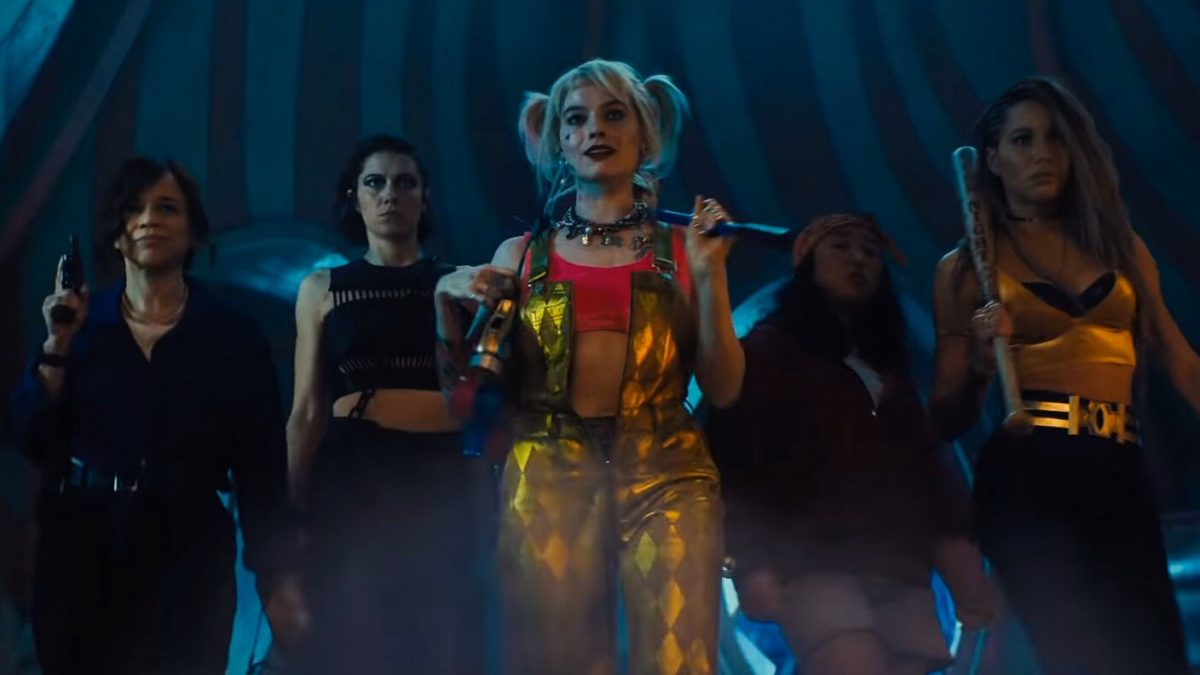 During Brazil’s Comic-Con there was a lot of amazing content that came out about the upcoming Warner Bros./DC film Birds of Prey starring Margot Robbie, Rosie Perez, Jurnee Smollett-Bell, Mary Elizabeth Winstead, and introducing Ella Jay Basco. First, let us take a look at these lovely posters.

The #BirdsofPrey have landed in Thunder Hall! Check out these new posters, and follow along on Instagram Stories for more mayhem at #CCXP! pic.twitter.com/YLvIz1ZK5M

Honestly, I know some people find them corny, but I enjoy the posters a lot. I think the film is really doing its own thing and leaning into the fun elements of the comic book film. I also just love the colors and the costumes. I saw some people online talking about how unsexy the outfits are and all I have to say on that is “grow up.” They look great and while I’m looking forward to seeing Black Canary in fishnets, I’m also just loving that Dinah is there and yes, being in their traditional costumes is great, but these looks work for the characters to so I’m here for it.

At the convention, two clips were screened. One was a new trailer that focused more on Black Canary (Jurnee Smollett-Bell) and Huntress (Mary Elizabeth Winstead) and the issues that help bring them into Harley’s girl gang (gang). First of all, I’m heartbroken because if there is one thing I want more of, it’s more of the other women in the movie to get their own TV spots. Release the Brazil cut!

The other scene they got to see was the opening sequence of the film which was described as follows in The Hollywood Reporter‘s coverage:

“Nonetheless, Harley got to narrate how she was starting over after splitting with the Joker, with a new place, some new pets — and a dead pet store owner to boot, but that’s what he gets for telling her he’d accept “payment in kind” — and finally found closure.

If this sounds a little too emotionally healthy for Harley Quinn, don’t worry; her closure came after overhearing friends joke that her split from the Joker was only temporary, and involved her getting drunk, returning to the special place she and Mr. J used to share — the Ace Chemical Plant where the Joker dropped Harleen Quinzel into a toxic vat, creating Harley as we know her now — and, after inspiration struck, destroying the chemical plant with the help of a tanker that was just sitting around, waiting to be stolen. As the plant blew up in technicolor explosions behind her, the logo for the movie appeared onscreen, and the footage ended.”

After the footage, Robbie talked about how she wanted to do this project because she wasn’t ready to say goodbye to Harley Quinn.

“I didn’t actually read the comics before I started researching the character of Harley Quinn,” Robbie said, “and then I started reading the comics and got obsessed.”

Each actress got to share their love for the characters, especially Smollett-Bell, who named-dropped Gail Simone as the inspiration behind her version of Dinah Lance. We also got to hear more about Canary’s backstory:

“A super-powered figure who, following the death of her crimefighting mother, has turned her back on doing the right thing, choosing instead to become a singer in Black Mask, the nightclub owned by Ewan MacGregor’s Roman Sionis. “What’s interesting for me to explore is a woman who’s so powerful but is at a point where she’s not willing to own her own power,” the actor said, before promising that, by the end of the movie, Dinah Lance is recognizable to comic book fans. “Dinah’s all heart,” she said.”

They are keeping her as a legacy character! The Black Canary stan in me is so happy right now I can’t even explain to you guys. Also, she’s clearly going to have the Canary Cry. We are gonna get the Canary Cry in a big-budget comic book movie.

I’m looking forward to this movie so much. Despite the hyper-focus on Harley (which is just a comic book nitpick), I’m just so excited to see a truly diverse, female-focused superhero movie, featuring some of DC’s finest. Honestly, if DC nails this (which I feel they really can), then as far as I’m concerned DC will be winning when it comes to female superhero movies.