I haven't gotten this emotional since I finished the third game. 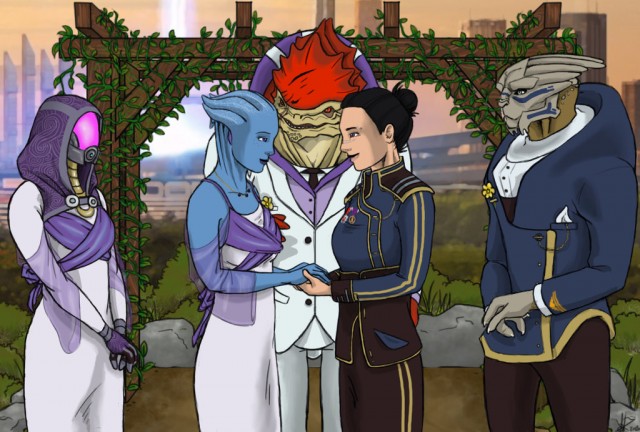 You may have noticed that the world hasn’t been entirely awesome for women who game as of late. So here, have a story that will make your GamerGate-weary heart grow three sizes this day.

Jackie and Amy are both huge Mass Effect fans, so when Jackie decided she wanted to propose to her partner, she contacted the Montréal studio for their help. Jackie wanted to be able to propose to Amy in-game, so studio manager Marie-Renée Brisebois sent out an immediate call to developers for help with the project.

After assembling a writer, level designer, and QA analyst – who all worked on the project free of charge – the team created a brand-new Mass Effect level. They made realistically difficult while also making it impossible for Amy’s character to die (so she wouldn’t have to start over), and also included some references to Jackie and Amy’s relationship (while still keeping it subtle enough that Amy wouldn’t be tipped off).

Brisebois sent Jackie and Amy a letter, saying that they had won a contest called “A Day with Our Devs” at PAX East, and that they were invited to tour the Montréal studio and test out Mass Effect 4. Here’s how the adorableness went down:

Once she reached the end of the level, Amy walked into a room with a lone console in the center that had her and Jackie’s names for one another spray-painted on the wall in 50-foot high graffiti. When she clicked on the console, a message popped up: “Dear Amy, Jackie would like to ask you something.

All of us at BioWare”

Jackie then got down on one knee, took out a ring, and proposed.

Brisebois called it “a beautiful sight to see” and that everyone in the room smiled and teared up. Lead level designer Colin Campbell agreed, saying “I think video games are powerful and an incredible form of art and entertainment and interaction, but they don’t often get two people married. There are only a few stories like that in history, and it’s awesome to be part of one of them.”

You can read the full story (plus super-sweet photos) over on the BioWare blog. Now if you’ll excuse me, I’m going to go cry happy tears for eight days until Dragon Age Inquisition comes out.