Binders At 2017 BinderCon Seek To Save World From A Bind

Binders. You’ve heard the word out of 2012 Republican presidential candidate Mitt Romney’s lips when addressing pay equity in the workforce by hiring women.

“And I — and I went to my staff, and I said, ‘How come all the people for these jobs are — are all men.’ They said, ‘Well, these are the people that have the qualifications.’ And I said, ‘Well, gosh, can’t we — can’t we find some — some women that are also qualified?’ And — and so we — we took a concerted effort to go out and find women who had backgrounds that could be qualified to become members of our cabinet. I went to a number of women’s groups and said: “Can you help us find folks?” And they brought us whole binders full of women.”

Romney’s “binders full of women” spiraled into memetic status and spurred a movement. Women and gender-variant writers claimed the Binder title as their own, converting “Binder” from a male politician’s soundbite into a feminist title of pride and resistance. Feminist writers contesting gender disparity in the literary, media, political world is nothing new under the sun, but feminist writers, in and out of newsrooms, have experimented with their own niche in expressing their disgruntlement and mobilizing their fellow writers.

Freelance writer Lux Alptraum and poet Leigh Stein cofounded the nonprofit Out of the Binders. Launched during Barack Obama’s second term of presidency in 2014, Out of the Binders assembles a diverse network of women and gender-nonconforming writers with the tools and career-boosting support system of panels, pitch meetings, and network parties (with cocktails!).

Binders of freelance writers, journalists, playwrights, photographers, and filmmakers recently gathered at the Los Angeles BinderCon 2017 on the campus of the Los Angeles during the first weekend of April. From mental health, workplace microaggressions, to outright vocal misogyny, BinderCon surveys the variety of obstacles encountered in a female writer’s career. “How to Advocate for Yourself When Your Work Advocates for Others” tackled the concept of getting fairly paid because, hey, just because binders like to write doesn’t mean that what they produce isn’t labor. “2 Thumbs Down: The Lack of Female Voices In Film Criticism” addressed the misconception that “the feminist lens” gets in the way of pop culture assessments, condemning the male-driven averseness to investigate the critical nuances of a film’s essence and personal subjectivity.

Since the political is personal, the subject matter of the Trump Administration is no elephant in the room but rather a spotlighted concern. A crucial lunch roundtable discussion “Welcome to the Media Under President Trump” covered the Trump Administration’s merciless dismissal of credible news sources and the counterpoint of reliable writers in search of truth and justice. The binders are confronting a surreal Trumpian era where their words—written, scripted, or televised—have weight in the grand scheme of journalism.

Situated in proximity to Hollywood, the panels conversed about the cinematic-driven realm of screenplays and filmmaking, including a VR & 360 Video for Newbies and a Heroine’s Journey screenplay panel that utilized Blue Is The Warmest Color clips to teach plot structure and pacing while discoursing on the nature of films with female touches. Featured speakers Gloria Calderon Kellett, Executive Producer and Co-Showrunner of the Cuban American-centered One Day at a Time and Tanya Saracho, playwright and TV writer, shared their stories on navigating the office setting. Although Kellett obviously doesn’t like blatant misogyny, it’s the “nice” men with their microaggressions—leading to a story about a writer approaching her to approve of a scripted salsa-sauce joke—that provoke her critical curiosity the most in the TV writer’s room.

Attendees attested to the quality of the learning and interactive environment. Cartoonist Betsy Streeter shared an especially unorthodox “Doodling Your Way to a Breakthrough” lesson where she heeded her audience’s vents and doodled them on a whiteboard to demonstrate how drawing can externalize your frustrations, your brainstorms, and your unfinished rough draft, whether you can draw portraits or stick-figures. 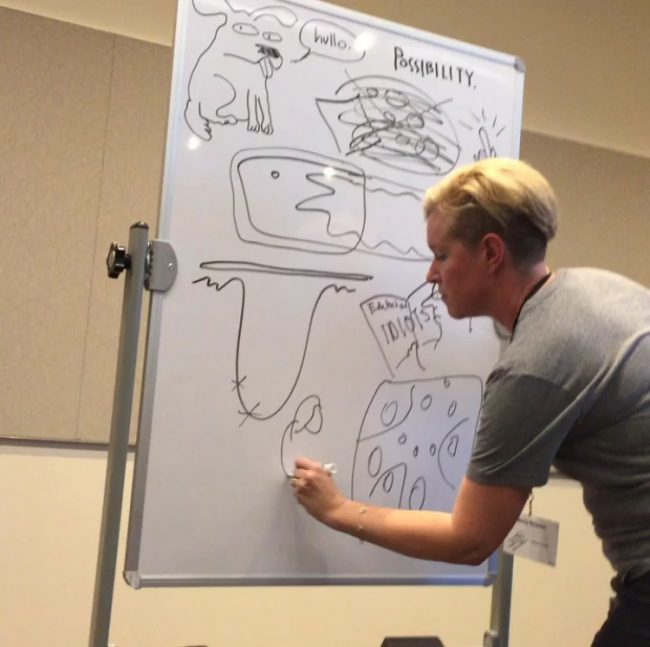 As a shot at the recent anti-immigration policies, someone vented, “Hey, all the best donuts come from immigrants, jerk!” With a black marker, Streeter sketched a glazed donut with the tagline, Donuts Come From Immigrants.

From rookie to published novelists, from audience to keynote speaker, everyone stands at equal footing, trading feedback, colorful business cards, book and movie recommendations, Twitter and Facebook accounts to follow, and pearls of wisdoms. Be it with wit or seriousness, binders are here to stay and save the world, one word, one sketch, one storyboard, one shot, at a time.