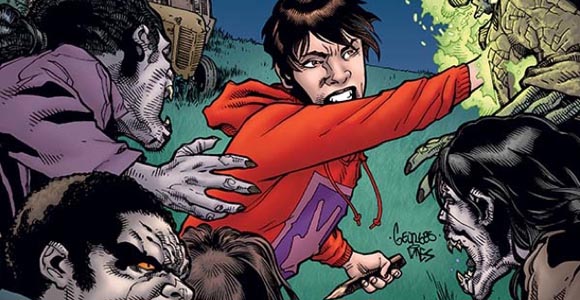 You know how it goes: “Into every generation a slayer is born: one girl in all the world, a chosen one. She alone will wield the strength and skill to fight the vampires, demons, and the forces of darkness; to stop the spread of their evil and the swell of their number. She is the Slayer.” Operative words there being “girl” and “she,” so what’s the story with Dark Horse Comics’ new gay male slayer? Hit the jump to find out!

Dark Horse gave the exclusive to Out.com today (how novel, a comic company making a smart PR choice!), revealing a brand new slayer on the scene for Season 9, named Billy. Longtime Buffy pal Jane Espenson explains Billy is going the Batman route, or the Nightwing route, as it were.

“Batman doesn’t have super powers. He wasn’t gifted with an exotic foreign birth,” Espenson told Out. “So we take the Batman route; Billy is earning the Slayer mantle.”

Espenson (she recently announced a digital comic based on her web comedy, Husbands) is collaborating with Drew Greenberg (who also worked with her on the television series) on Billy the Vampire Slayer. “For very good reason, we’ve focused on the female empowerment part of Buffy,” she said, “but I wondered, Did we leave something out? What if someone in high school is looking up to Buffy as a role model, and we’re saying: ‘You can’t be a Slayer.'”

Out writes, “Greenberg says that Billy is about a young man who finds strength by standing up to vampires (a metaphor for bullies?) and defining who he is going to be rather than letting others tell him who he should be.”

And what about the naysayers who will inevitably call adding a gay, male slayer, a ploy to sell more comics (let’s not forget they are a business, people)?

“We’re hardly pandering when we make a comic book,” said Espenson. “There’s always growing pains when making progress, but I think cycnicism in the face of inclusion may not be a profitable route in making progress.”

“I have no problem telling a story about a boy who’s always felt more comfortable identifying with what society tells him is more of a feminine role. So much crap gets heaped upon us as gay men — crap from straight people and, frankly, crap from other gay people — about how it’s important to be masculine in this world, how your value is determined by your ability to fit into masculine norms prescribed by heterosexual society and, sadly, co-opted by gay society as a way to further disenfranchise and bully those who don’t meet those norms,” Greenberg says. “And those attitudes are a reflection of not just our own internalized homophobia, but of our misogyny, too, and that’s something I’ve never understood. So if this is a story that causes people to examine traditional gender roles and think of them as something more fluid, I’m thrilled.”

Read more of what Espenson and Greenberg had to say, plus check out some preview pages from the issue, at Out.

You can pick up Buffy the Vampire Slayer Season 9, #14, with a cool variant cover by regular artist Georges Jeanty (you can see the full cover on Out.com), in your local comic shops or through the Dark Horse digital comics app, on October 10th.