Frustrating Figure of the Day: Star Wars: The Phantom Menace Hits the One Billion Dollar Mark 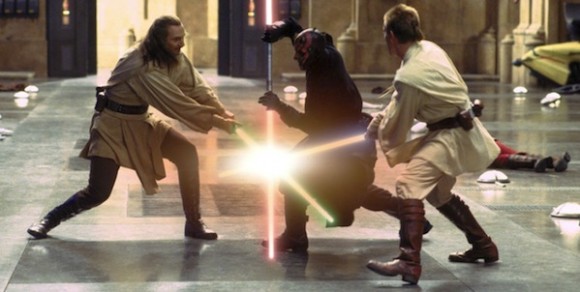 Thanks to its re-release in 3D last weekend, Star Wars: Episode I – The Phantom Menace, is poised to surpass The Dark Knight as the 10th biggest grossing movie of all time and has hit the one billion dollar mark, making it the first Star Wars movie to do so. This one. The Phantom Menace. We hope you’re happy, America. Yippeeeee!

Even as someone who has only passing knowledge of the entire Star Wars series, having seen 5.5 of the movies (only the second half of the second third one, on TV), I know how, um, lackluster The Phantom Menace is. I did see that one, once. And that was enough.

When it was first released in 1999, it was 100 percent understandable that The Phantom Menace made a buttload of money. It was the first installment of a new trilogy of Star Wars. Who wouldn’t be excited about that? So, of course it made $200 million, and then $300 million in a record amount of time. But then everyone realized it was actually not at all a good movie. To this day, it shows up on a lot of “worst sequel” lists, and the two follow-ups didn’t fare much better. (Though the Revenge of the Sith probably redeems the second trilogy a tiny little bit because: Darth Vader.)

But now, here we are, talking about this same movie making one billion dollars, getting ready to shove the far superior The Dark Knight out of the top 10 highest grossing movies of all time. And that’s terrible. Maybe The Dark Knight Rises will prove to be a contender and shove Jar-Jar Binks back into 11th place.

Yeah, remember? Jar-Jar Binks was in The Phantom Menace. And it made one billion dollars. That’s a thousand million.

(The Hollywood Reporter via Blastr)