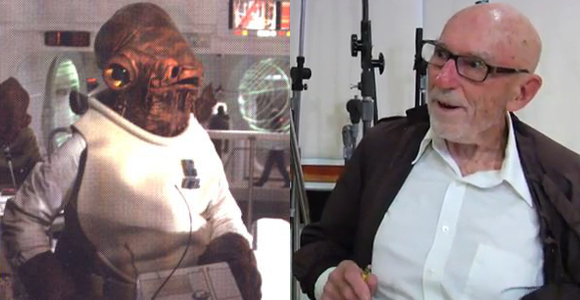 Radio dramatist Erik Bauersfeld still gets fan mail to this day all thanks to three little words – “It’s a trap!” Bauersfeld played the voice of Admiral Ackbar in Star Wars: Return of the Jedi as well as voicing Bib Fortuna. And the work only took him about an hour and a half.

Admiral Ackbar was portrayed in the film by puppeteer Timothy M. Rose, but it was Star Wars sound designer Ben Burtt who approached Bauersfeld and asked if he’d like to try out for some of the voice roles in Return of the Jedi. According to SF Gate, Bauersfeld is “a longtime fixture at Berkeley’s KPFA radio with a stellar reputation as a prolific radio dramatists. He was a mentor to multiple Academy Award winning sound designer Randy Thom, and at 90 years old is still producing new material.”

Bauersfeld reveals in the interview that he had a shot at playing Yoda in the series and was actually the last person to audition for the role. And if you can believe it, he still hasn’t seen the first Star Wars. “In a world where actors with very small connections to science fiction movies can make a lot of money on the convention circuit,” writes SF Gate, “Bauersfeld refuses to charge for his autograph. ‘It’s not so much money,’ Bauersfeld told me, adding that he already has enough income for his simple needs.”

“The fans who write say they’ll never forget ‘It’s a trap!’ I don’t even remember how I said it,” said Bauersfeld who had no idea of his internet meme fame. All it took for the actor to come up with Ackbar’s voice was to look at a picture of him. Take a look at the man himself talking about the role, and yes, he does the line.

You can also read an extended article on Bauersfeld conducted by the same interviewer here and you can learn more about his radio work and life on his own website, www.bardradio.com.