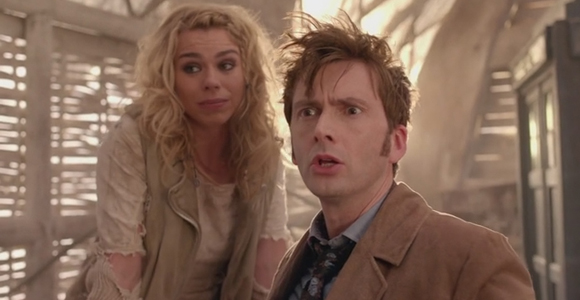 Ok, look. It hurt my very soul for Billie Piper to be in the Doctor Who 50th anniversary and not actually be Rose, let alone interact with David Tennant’s 10th Doctor. Not as much as say this, or this, but A LOT.

Anyway, Doctor Who TV has a report up about Piper’s recent Awesome Con appearance in which she referenced that event:

She said: “I’ve heard a lot of that, [fans saying] ‘Why couldn’t you just be Rose and actually see [the Tenth Doctor] and be with him?’”

“I think to come back and do something slightly different was welcome for me because I’d come back so many times that even though I loved Rose I thought it probably needed a bit of a shift. And that’s what Steven Moffat wanted, he brought something very different.”

She adds: “It’s good to watch it and wish that they could somehow connect in the way they used to instead of being totally satisfied. I really enjoyed playing it because I could be a bit mad and a bit strange.’

But a fan in the audience also asked Piper if she’d be interested a spin-off featuring Rose and the Meta-Crisis (aka notreallythedoctorgivemetherealdoctor) 10th Doctor. She said, “That would be interesting… I’d be game!”

Speaking of people returning to the show, Suranne Jones, aka Idris, aka The TARDIS, was recently asked if she’d be interested, to which she answered “of course.” Doctor Who TV writes:

Speaking to Toby Hadoke on his Big Finish podcast [via], she said: “Wouldn’t it be nice if Peter Capaldi walked into one of his rooms in the TARDIS and found Idris’ body there, plugged her in and had a little adventure with her?”

Piper, I will take your spin-off gladly, Jones, I adored you but would prefer Neil Gaiman’s story to remain intact. What are your thoughts, readers?