“The last one was a little Where’s Waldo-y.” 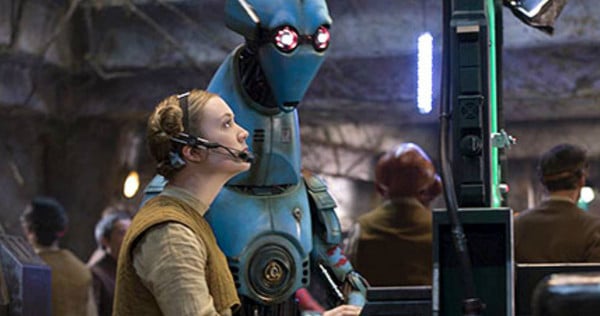 There were a lot of rumors swirling around Billie Lourd’s character in Star Wars: The Force Awakens. At first, there were the ones that said she’d be playing a younger version of Princess Leia (a.k.a. the character played by Lourd’s real-life mom, Carrie Fisher)–especially when photos were revealed of Lourd’s hair styled in some very familiar twin buns. But Lourd shot down those rumors pretty quickly.

For those of us who inevitably saw the film, we learned that Lourd’s character did get to interact with the now-General Leia Organa as Lieutenant Connix, a young woman in the Resistance who serves under Leia.

In an interview at Paleyfest last night, Lourd said she will be returning to the Star Wars universe for the next movie–but in typical big-franchise fashion, her lips were pretty sealed about most of the details. One thing that was confirmed, though: her part will be bigger than it was in The Force Awakens–though to what degree is up in the air as of now.

And as for whether or not we’ll get to see her character in any more scenes with Leia? Lourd only had a one-word response: “Maybe.”

It’s not a yes and it’s not a no, either! I was pleased as punch to see a good number of ladies in the Resistance after not really spotting a lot of them in the Rebellion during the original trilogy, so any news that we can expect more female characters–and hopefully more scenes from these female characters–is definitely good news.