Want Clean Water? There’s a Billboard For That 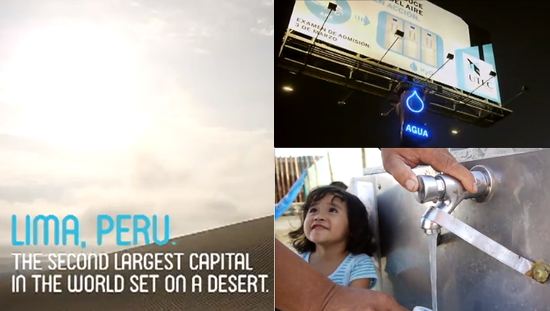 When you walk or drive by a billboard, you’re probably (a) delighted by what’s being advertised, (b) annoyed at what’s being advertised, or (c) annoyed by the eyesore the whole thing represents. What you’re probably not thinking is, “I sure could use a glass of water. How about I head over there and fill up?” But in Lima, Peru, there’s a billboard for that. An ad agency and the University of Engineering and Technology (UTEC) have collaborated to install a billboard that produces clean water. How and why did they do this?

Lima is situated in a coastal desert, where clean drinking water is in short supply and virtually no rain falls. But the air is humid, and that’s what UTEC and ad agency Mayo DraftCFB are capitalizing on. Using a process reverse osmosis, water is drawn out of the air, filtered and stored, and then dispensed as needed to thirsty members of the Lima community. The billboard generates 96 liters of water per day, which provides for hundreds of families each month — pretty great, though not nearly enough to meet the needs of the city’s 7 million inhabitants.

The idea, of course, is to erect such billboards all over the place: Throughout arid cities like Lima, to remote villages, or anywhere potable water is needed, with humidity being a key ingredient.

Interestingly, the project wasn’t so much driven by Lima’s need for water as UTEC’s need for more engineering students. Their motto is “We will continue changing the world through engineering.” And if this is what such students could get working on, we’re all for it.

Fortunately, the Peruvian government isn’t counting on UTEC and Mayo DraftCFB. They’ve recently announced a $3.3 billion-dollar upgrade they plan on making to their water and sewage infrastructure to provide better drinking water to their citizens.

advertisingPeruUniversity of Engineering and TechnologyWater